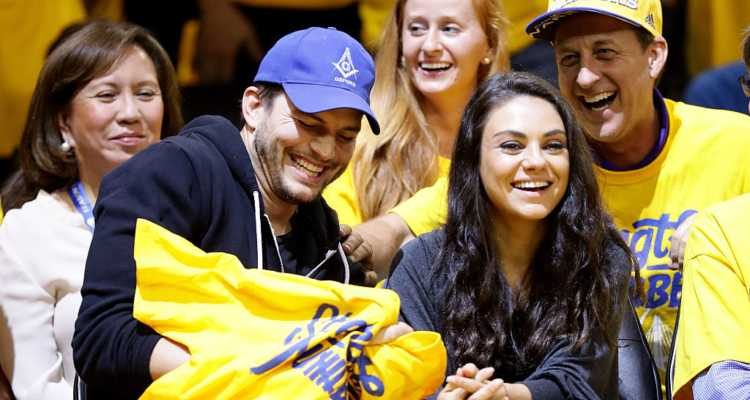 Actress Mila Kunis has been spotted post-pregnancy for the first time since giving birth to her second child, Dimitri. The 33-year-old was seen looking great with husband Ashton Kutcher, 38.

The couple was seen holding hands and smiling as they walked in Los Angeles, California. Kunis was seen in a sweater and jeans; however, she is a long way from her pre-pregnancy body after just nine days from giving birth.

Shortly after Dimitri was born, a message was posted on Ashton’s website to announce the news and his name. The baby boy was born Nov. 30 at 1.21 a.m. He weighed in at eight pounds and 15 ounces.

Kunis and Kutcher chose the name Dimitri as a Russian version of the Greek name Demetrius. Kunis was born in the Ukraine SSR, Soviet Union. Kutcher and Kunis’s first child and daughter, Wyatt, was born in October 2014.

The Hollywood couple also posted a message for the public that stated they would want to allow their kids to make their own choice on whether to have a life in the public eye, and that they don’t want to make that choice for them. Mila Kunis and Ashton Kutcher are a high profile couple used to being in the public eye, including at Los Angeles Dodgers baseball games.

Ashton Kutcher and Mila Kunis first met on the set of the hit TV series That ‘70s Show. Kutcher and Kunis portrayed on-again, off-again teen couple Michael Kelso and Jackie Burkhart. After years of being just friends, the actors got together and later became engaged in February 2014. They got married July 2015 at a ranch just outside Los Angeles.

Having already given birth to one child, Mila Kunis knows a thing or two about getting back to her pre-pregnancy weight. She shouldn’t have a difficult time with it, considering that she ate well and worked out while pregnant. Let’s take a brief look at what Mila Kunis eats during her pregnancy.

What is Mila Kunis’s Post-Pregnancy Diet

Mila Kunis will always consume a clean diet, especially when she is pregnant. Her clean diet will include a good combination of low-glycemic carbs, essential fats, and proteins. It is also a nutrient-dense diet with lots of fruit and vegetables. Key nutrients for everyone, but especially pregnant women, include chromium, iodine, calcium, iron, magnesium, manganese, selenium, zinc, essential fatty acids, and healthy fat sources like eggs and avocado.

While pregnant, Kunis has a history of giving in to Mexican food cravings, she and especially enjoys fajita salad, fish tacos, and guacamole.

She will also enjoy burgers with slow-roasted tomato, cheese, butter lettuce, and caramelized onions. Her other food cravings include ice cream and pickles. However, Kunis will also often be found leaving the grocery store with a bag of leafy green vegetables.

How Does Mila Kunis Work out?

When Mila Kunis was pregnant, she was often spotted at prenatal yoga classes, which combine pregnancy-safe yoga postures, meditation, and dance. Yoga and meditation, in particular, are perfect for pregnant women suffering from mood swings and anxiety.

Kunis also loves calorie-burning spinning classes and has been spotted at Blazing Saddles studio in Sherman Oaks. The spinning studio offers no-impact aerobic exercise programs that take place on a specially designed stationary bicycle. The spinning classes will help build stamina and strength, while also burning calories and improving cardiovascular health. Other light workouts for Kunis would include skipping and Pilates.

“Mila Kunis looks incredible as she steps out with Ashton Kutcher for the first time since welcoming son Dimitri one week ago,” Mail Online website, Dec. 10, 2016; http://www.dailymail.co.uk/tvshowbiz/article-4020620/Mila-Kunis-steps-husband-Ashton-Kutcher-time-welcoming-son-Dimitri.html, last updated Dec. 12, 2016.