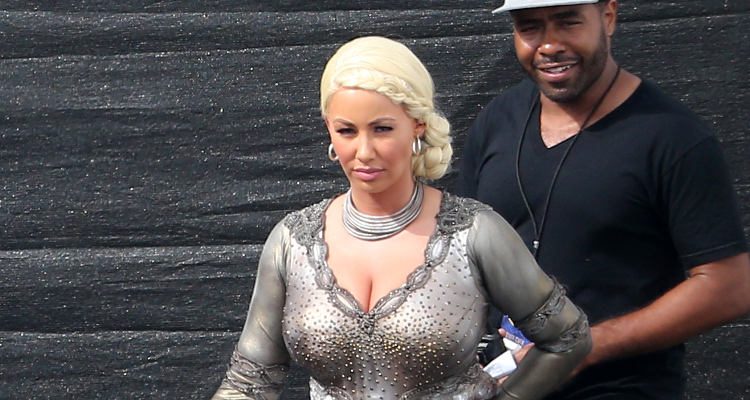 Model Amber Rose is benefitting enormously from her current participation in the 23rd season of Dancing with the Stars, where she is paired with professional dancer Maksim Chmerkovskiy.

The dancing duo must perform a different routine each week, which is scored by the judges. Rose must give it her all because if she gets a low score from the judges, she is in jeopardy of being eliminated from the competition.

She was almost the first celebrity to be eliminated from the show due to her first week’s low score. Let’s look at Rose’s grueling preparation for the competition and how her body is transforming because of it.

Amber Rose on Dancing With the Stars

One could speculate that Amber Rose shocked herself when it came to the benefits of being on ABC’s dance competition show. Judging by the disclosure she made on her podcast Loveline with Amber Rose, which airs on Thursdays, a lot of work goes into getting all the moves down just right.

The stunning model revealed that she is practicing for up to five hours per day with her partner in order to learn the dance moves involved in her weekly routine. The best part is that Rose is noticing she is shedding pounds. She admitted on her podcast that she thinks she has lost anywhere from eight to 10 pounds since beginning the show. A 10 pound weight loss is considerable!

Her toned-down figure and slimmed waistline was noticeable as she was snapped by the paparazzi leaving rehearsals in Los Angeles recently. She was dressed in workout gear – a white T-shirt, black leggings and runners. She appeared to be in good spirits alongside hunky partner Maksim Chmerkovskiy.

As this is only the very beginning of the competition, it’s not hard to imagine what the future holds when it comes to Rose’s body transformation. All the intense dance rehearsals and performances are some of the most superior forms of cardio. Cardio is the one exercise that specifically targets fat and excess weight.

Although she’s known for being voluptuous and curvy, audiences may see Rose experience continued weight loss and muscle building – only time will tell. It’s safe to say that Rose is gaining appreciation for the hard work and precision that goes into perfecting a dance routine. Tons of skill and practice are required, and she is learning this first hand from being on the show.

Rose goes on to say that the Dancing with the Stars cast has become like a tight-knit family and due to her almost leaving the show last episode, emotions were high. This will likely be motivation and incentive for Rose to up her game in the coming weeks.

Amber Rose is not only learning new dance moves, she’s also benefitting from weight loss. The 32-year-old looked great to begin with, so one can only imagine what her dance moves – and her figure – might look like in the weeks to come. Good luck to you, Amber!