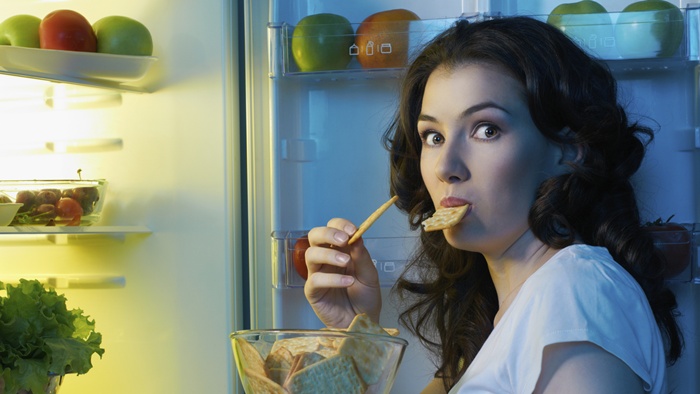 When most of you are in bed, peacefully sleeping the night away, I’m up, fully awake, sneaking around the kitchen, opening and re-opening the cupboards and the fridge. I’m anxious, a bit jittery and trying to decide on one thing and one thing only: what am I going to eat?

It’s something that happens on and off, for a few days in a row, where I’ll bolt from bed, abruptly awake, torn out of a good or bad dream, no difference. It’s like insomnia with a twist. I’m wide-eyed and hungry at 2 or 3 a.m.; I decide to ignore the hunger and get a glass of water from the filtered pitcher in the fridge. So I do it, gulping down the water and then… I’m not sleepy; there’s no going back to bed, so I’m going to have a snack. Last night it was ice cream right out of the mini-tub. I’ll just have a small scoop on a spoon. And then I rapidly finish it off. It’s that kind of unconscious mouthful after mouthful of mindless eating. My mind is racing around, focusing on anything but the food.

Some nights when this happens, I try to have something quasi-nutritious, like a granola bar or small bowl of cereal—better than candy, but…

For the most part, I can settle myself down and go back to sleep. And then when I’m up for the day (a few hours later), I skip breakfast, thinking I’ve already downed enough calories and shouldn’t overdo it.

Now, I’m a health-conscious person who tries to do right by her body, treat it like a temple, and so on. I know the importance of a balanced breakfast to properly start the day. But somehow, I’ve gotten into this terrible habit of eating in the middle of the night. If it were only a handful of raw almonds from my bedside table I was having, or a glass of rice milk—something that’s healthier—I wouldn’t feel so guilty. But often I’m up for 30 to 40 minutes, sometimes longer, sitting on the living room couch in the dark, snacking away. I live in a small condo with my husband and young son, so I try to be as quiet (and discreet) as I can. A few times my husband has heard the tear of the cracker package or the wrapper ripping off a granola bar—he tells me to leave the food and come back to bed.

If only it were that easy.

I like to psychoanalyze myself and my actions (just because) and I could be experiencing a mild form of night eating syndrome (NES), a condition that causes people to wake up hungry during the night, often more than once, and get up to deliberately snack. Repeatedly. Some people eat more than half their daily calories—hundreds of them—this way. Not surprisingly, the condition has been linked to excess weight gain and obesity.

In ongoing research on the subject at the University of Pennsylvania, researchers are convinced NES is not an eating disorder, but a combination eating, stress and sleep disorder. In many cases, NES leaves people feeling guilty and ashamed of their habit, which creates a vicious cycle of starving by day and grazing through the night. Typically, people with NES are exhausted and daily life tasks become more challenging than ever. Sound familiar?

Both women and men suffer from NES, Dr. Kelly Allison, a research psychologist at the University of Pennsylvania, told NBC Dateline in 2013: “In fact, men represent about 40 percent of the people diagnosed. A third of all patients battle obesity and the life-threatening health problems that go with it.”

Allison and her colleagues have found that an effective treatment for NES is not a diet to address overeating, but therapy for stress and depression, the two underlying issues at play.

Am I depressed? Not that I know of, but am I stressed? Yes, but isn’t everybody? I’ve managed to keep the extra calories and possible weight gain under control, getting up only once at night and going for a week or two at a time where I sleep through the night. I’m sure I don’t have a full-blown disorder, but maybe it’s time I do something about it.

Maybe it’s time I try some stress-relief techniques, like fitting in more exercise during my week, going back to yoga class (I used to go once a week up until about three months ago), or making a date to see a friend more often. I’m supposed to be training for a 10K race coming this September with a friend where we run and then sit for a drink to wind down and relax after. So far, we’ve done it only once in the past month. So, you know, life gets in the way of plans and good intentions. Those daily habits add up: Drink enough water, eat whole foods, make time for activity, never go to bed angry.

You’d think I’d know better than to let myself get wound up tight like a stress-ball that’s forgotten how to bounce back. And I do.

My advice to my fellow night-eaters? Take a moment for you to reflect on your habits, your stresses and your blessings. See your doctor to ask for help, and make some lifestyle changes for your health.