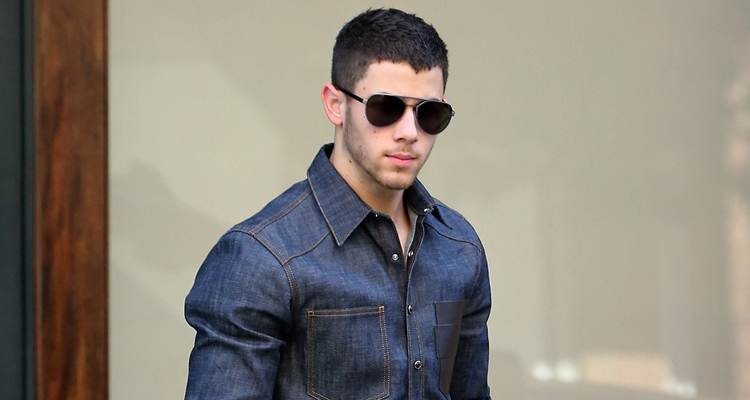 Nick Jonas looks stunningly ripped and he recently took time out to congratulate on the victory of his fitness inspiration, MMA pro fighter, Juan “The Spaniard” Archuleta. Nick Jonas is definitely proud of his friend’s latest victory and he took to Instagram and posted a black-and-white photograph of himself and Archuleta.

He captioned the photo,“The champ @jarch135 after having just won his fourth belt in six months. Hard work pays off and this guy puts everything he has into this. So proud to get to work beside him on @kingdomaudience and proud to call him a friend. Now it’s on to the next great challenge.”

The message seems to come straight from the heart of the Kingdom star, Jonas. He also called out to UFC and added, “@ufc where you at?! Let’s get this man the fights he deserves!”

The champ @jarch135 after having just won his fourth belt in six months. Hard work pays off and this guy puts everything he has into this. So proud to get to work beside him on @kingdomaudience and proud to call him a friend. Now it's on to the next great challenge. @ufc where you at?! Let's get this man the fights he deserves! It's go time. #kingdom #ufc #mma

In the Instagram photo, Jonas is proudly flaunting the four belts which Archuleta won in six months. Now, that is a wonderful goal achievement and it is no wonder why the MMA pro fighter is such an inspiration. Archuleta admitted that his non-stop work ethic, resilience, and having a good team has been the success to his victory.

It is a wonderful feeling to be trained by your fitness inspiration. Jonas and the cast of Audience network’s American drama series, Kingdom, was trained by Archuleta. The Kingdom cast had other trainers like Greg Jackson and his team, as well as by Joe Daddy Stevenson.

How does the Kingdom star maintain his ripped looks? Keep reading to find out Jonas’ intense workout regimen and diet plan.

Jonas maintains his ripped physique by following an intense workout regimen. He likes to post his workout photos and videos on Instagram. For example this photograph which is captioned, “Gettin it today… Two a days in prep for Kingdom season 3.”

The celebrity who played the role of an MMA fighter, Nate Kulina, worked hard to fit the role. He told Men’s Fitness, “I put on about 20 lbs. of muscle in a month and a half.” The star went through an intense boot camp which included kickboxing, Muay Thai, grappling, and jiu-jitsu.

His workout regimen focuses on putting on muscle, breaking plateaus, and building strength. He heads to trainer Gregg Miele’s program centers and includes groups of three exercises, which he does back-to-back. He tries to exercise the same body part with a diverse set of loads, tempos, and intensity. He said that this helps to, “target a wide range of muscle fibers and get a large volume of work per session.”

To get in shape for the Kingdom role, he was doing three sessions a day which included fight-training with Kingdom’s coach, Stephenson, and strength-building with Miele. He performed tri-sets workouts which focused on exercising different regions of the body—the upper-body, the lower body, legs, arms, and core. He performed a circuit of six different moves for one area.

Other exercises included in his routine were weighted pull-ups, dumbbell rows, crunches, dead-lifts, squats, dips, hammer curls, and more. He was also lifting a lot of weights which helped to break the muscles down. He also likes to include hot yoga in his workouts, and heads to Modo Yoga in Los Angeles.

Jonas who follows an intense workout regimen, likes to follow a balanced diet plan. While working out for his Kingdom role, he said, “I went from consuming about 3,000 calories a day to 4,200! Paleta, a food-delivery service, sent me three meals a day and snacks. It was an incredible way to know that I was getting what I need to build muscle and not have to think about it.” He added, “Breakfast was usually an omelet with veggies and cashew cheese, a turkey-meat patty, and some fruit; lunch and dinner would be lean protein, veggies, and nuts; snacks consisted of things like snap peas with peanut sauce.”

He admitted to having type 1 diabetes so he needs to be conscientious about food. He confessed, “I do have guilty pleasures, though. I wasn’t drinking at all while I was training for the show, but now that we’re done, I keep it classy with Coors Light.” After an indulgent night, he likes to head to Voda Spa in Los Angeles and sweat out in the steam room and then go for his workout routine.

Fitness enthusiasts would definitely be encouraged by ripped actor, Nick Jonas and MMA pro fighter, Juan “The Spaniard” Archuleta. The celebrities show how to stay in super shape through hard work and diligence.