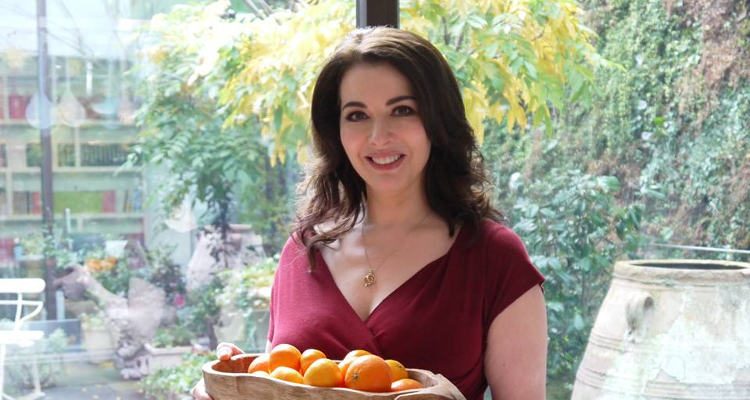 Nigella Lawson, renowned gourmet and food writer, has also been a journalist and broadcaster. She hosted her first cooking show, Nigella Bites, in 1999, and published a cookbook by the same name. Later, she hosted a number of shows like Nigella Feasts in 2006, Nigella’s Christmas Kitchen, and Nigella Express.

In a heavy-based pan, add the chopped chocolate, condensed milk, salt, and butter. Cook over over low heat until melted.

Put the nuts in a freezer bag and beat them with a rolling pin to break them into pieces. Add the nuts to the chocolate mixture and mix well.

Pour the mixture into a square tray and smooth the top with a wet palette knife. Cool the fudge by refrigerating it to set.  After it sets, you can cut it into small pieces and store it in the freezer.

In a large bowl, pour the oil and add the cinnamon and cumin seeds. Add the cauliflower and toss it to coat. Pour it into an oven tray and and place it in the oven for 15 minutes.

In the same bowl, add chickpeas and one to two tablespoons of harissa and toss. Add tomatoes and stir well.