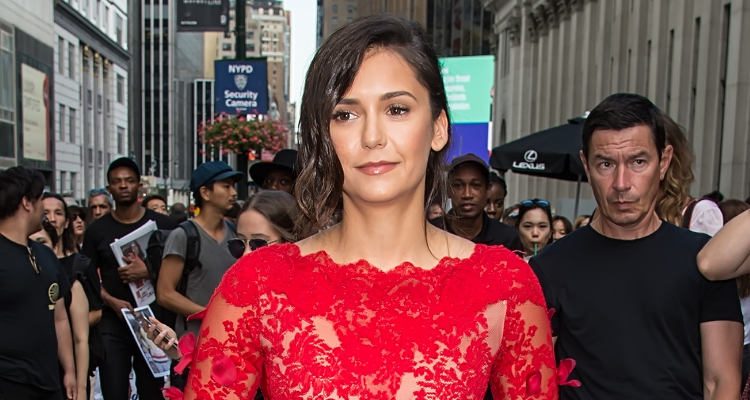 Nina Dobrev bedazzled her fans with her stunning looks as she attended the American Music Awards (AMAs) in Los Angeles on November 20. Dobrev donned a blazer and shorts which flaunted her enviable figure.

The Vampire Diaries star revealed her outfit by posting a pic on Instagram—and she looks fabulous. She is also rumored to be returning for the final season of the television series.

It was quite a moment onstage when Dobrev and best friend, Julianne Hough, presented Aubrey Graham (aka Drake) with an AMA for Favorite Rap/Hip-Hop Album for Views. Drake is also popular for his role as Jimmy Brooks in the teen soap series, Degrassi: The Next Generation. The actor took a moment to congratulate Dobrev, who also co-starred with him in Degrassi saying, “Congratulations on all your success. We’ve come a long way.”

Congratulations on all of YOUR success @champagnepapi ?

The actress is also excited about being featured on the cover of the Men’s Health in December 2016 issue. She asked her fans to look out for a copy and posted, “My Men’s Health cover is on news stands now! Pick up your copy today!”

Dobrev has a super fit body. Are you curious about her workout regimen and diet? Read on to find out.

The celebrity has always been in fantastic shape. Her trainer, Steve Moyer, of the Moyer Method, confirmed this and said that Dobrev is self-motivated and is devoted to her workout regimen.

She loves to do Bikram yoga and performs it three or four times a week. The downward-facing dog yoga pose, Adho mukha śvānāsana, is her favorite yoga pose, and she finds that practicing this posture can assist with calming the mind. Dobrev is an avid dancer as well and loves to do ballet which also helps her to stay in shape.

She follows her trainer’s recommendations about being aware of the calories she consumes in her diet. This means including very few processed foods and lots of vegetables in the diet. The celebrity believes in a balanced diet and her meals consist of green veggies, lean protein, whole grains, and healthy fats. She has five to six small meals a day, and focuses on including protein sources like meat and almonds.

This pic on her Instagram account hints at the superstar liking desserts. She posted, “Stressed spelled backwards is “Desserts”. What a great way to end the week & this amazing meal … Molten Chocolate coconut peanut butter brownies with honey glazed almonds, a pinch of coconut flakes.”

Stressed spelled backwards is "Desserts". What a great way to end the week & this amazing meal … Molten Chocolate coconut peanut butter brownies with honey glazed almonds, a pinch of coconut flakes, and a side of ?smoking hot? lovely ladies ?? #ThursdayIsTheNewFriday