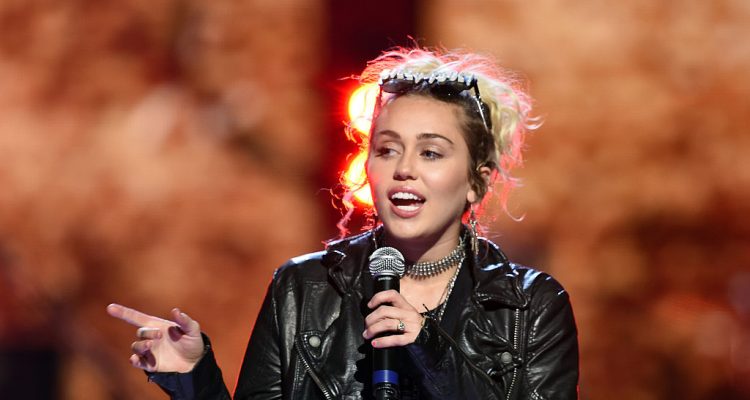 It was on Instagram that Miley Cyrus first posted the picture. The singer posted a selfie pointing to a faint pimple on her forehead. Dressed in grey casuals, Miley appeared to be at home and looked surprised.

Her brunette mane was tied in a top knot. The caption read “I deserve it. Too much pizza. Not enough water. #firstpimpleof2017

The diet conscious singer surprised her fans with her upload. Always someone who is known to follow a vegan diet and strict clean eating habits, Miley’s first New Year upload was unexpected.

I deserve it. Too much pizza. Not enough water. #firstpimpleof2017

The picture received more than 190,000 likes from her fans in just a few hours after it was uploaded. Fans also commented on how they could relate to the situation personally and showered New Year 2017 wishes for the star.

The Wrecking Ball singer has never shied away from showing the world her true self. A believer of living life to the fullest, Miley’s charm, ever-smiling face and her affection towards kids has made her one of the most popular names in Hollywood.

Miley’s Instagram too features daily upload of the star’s diet, workout and day-to-day tactics. The American singer, actress and songwriter also believes in the power of yoga, clean diets and food selfies! Thus, all in all, the beauty is keen on keeping her lifestyle healthy and her physique spectacular.

Miley Cyrus is known to follow a strict Vegan diet. She also isn’t the least bit concerned about sharing her views about veganism on Instagram.

She recently posted an animated post which read “Honey, I’m not saying you have to be a vegan, but I’m a vegan and I just think it’s f###ed up you murder animals.”

In another one, she slammed the general views on Veganism by posting a picture of her plate of food which displayed rice with peas and veggies and looked delicious! She also posted a selfie with a large bottle of green juice, something which the singer maybe consuming as part of her all-vegan diet.

She posted a close-up of her plate in another upload, which showed a delicious combination of tomatoes, peas, bell peppers, button mushrooms and greens.

Another one showed Miley sipping a green drink with plenty of ice in a tall glass and wearing a sports bra.

Yet another food upload, featured a close-up of what appeared to be a clear container with a dark colored liquid, edible leaves and colorful flowers on the top. Her caption read, “Secrets to being beautiful on the inside…Eat/drink beautiful thangs.”

Her next Instagram picture showed a plate with avocado, tomatoes, mushrooms, greens alongside a bottle of a green colored drink. The juice bottle had the ingredients ‘Ginger, romaine, spinach, cucumber, celery, parsley, lemon,’ mentioned on the outside.

Her next Vegan food upload featured a brown, tortilla like wrap stuffed with avocados, tomato sauce, lentils and veggies. She captioned it “Ignore the bite mark! But f##k yeah dinner for one! Made with lots of love! #vegan”

Another vegan food selfie had Miley literally getting up from bed to devour it. The close-up picture had Cyrus biting into the rice and avocado, while she captioned it “Will. Leave. Be. Fo. Avocado. Only”