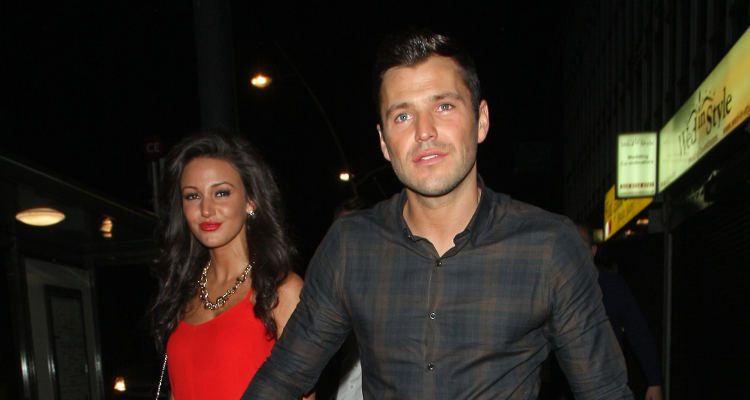 Former The Only Way Is Essex (TOWIE) star Mark Wright, 29, and his wife Michelle Keegan, who currently stars on the British show Our Girl, have been doing work outs as a couple lately. Wright has been sharing his workouts and shirtless physique on Instagram with fans lately, proving that he does indeed work out hard when he’s at the gym.

His gym sessions and diet regimen have been pretty grueling, and he even talked about it in a video posted a few months ago that he called “Temptation to the max!!” What was the source of the temptation exactly?

In the video, Wright says he has a bit of an issue and pans to a table loaded with bacon and sausage buns and other delicious looking pastries, and then to a woman sitting right next to him eating one.

All he could do was smell it, he says, because he was trying to lose fat, another five pounds of it, while still on his cutting diet (a diet that removes certain items from the menu). So clearly, pastries of any kind were out of the question for the actor.

Wright had a strict workout and a set diet over the summer, because he wanted to gain muscle and lose body fat so he would look more ripped. This is the actor’s typical routine when prepping for a big event – six weeks before the event he ups the cardio and improves his diet.

That’s not to say he doesn’t follow a diet throughout the rest of the year. Wright says he likes to stay lean and keep himself in good shape year round, not just for events.

The actor’s typical breakfast comes after he goes for his morning run on an empty stomach, so it burns off fat reserves. After the run, he will have some eggs, avocado, and smoked salmon.

Lunch is often another workout, this time at the gym for some weight training, and then he will have a protein shake and some chicken salad. Dinner is often fish or steak with salad.

The former Coronation Street actress, also 29, says that putting on weight isn’t a big deal for her at all because she knows that when she goes to the gym again she will tone up. Not taking it seriously is her philosophy. One thing this actress can’t resist is carbs and savory food.

Though they have been seen around town going to the gym together, Keegan has said there’s no way she and husband Mark Wright could work out together (even though they might be in the same space.) She does say he comes over and tries to give her tips, but it really annoys her. However, she admits that it does make her train harder at the same time. Keegan’s workouts are all about weight and resistance training.

About his wife, Wright has said publicly that she doesn’t really diet and will even eat ice cream bars before bed. Michelle Keegan keeps her body by working out a few times a week and generally watching what she eats, according to her hubby.