Home > Food News > Overfed But Starving: Are You Hungry for Change? 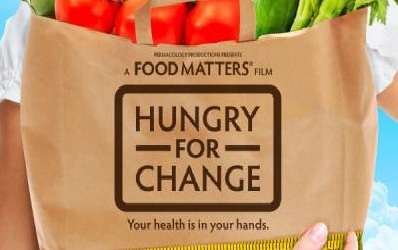 We constantly eat, but we’re never full. Our plates have gotten larger than ever before, but they’re filled with things that barely look like food. Boxes and cans fill our kitchens, not fresh fruits, vegetables, or herbs. How did we get here?

There is perhaps no other generation to date to have as much abundance as we do in North America today. Our grocery stores are always full—if there’s even one item of one variety missing on the shelf, it’s immediately replaced. Yet despite the fullness of our grocery stores and our homes, we live as if we lack. So we stockpile, and store, and eat, eat, eat. In essence, we’ve become so used to just eating that we don’t stop and wonder if we’re actually feeding ourselves what we need to be eating.

That’s the message behind a powerful new film called Hungry for Change. The filmmakers rightfully note that “we live in a world of abundance, but have an attitude of lack,” and it’s causing a global epidemic—rising disease and illness like we’ve never seen before.

According to recent studies, about one-third of all women and one-quarter of all men in the U.S. are on a diet. In fact, more than $60.0 billion is spent just on diet and weight loss products in the U.S. every year. The problem? We’re looking for answers in all the wrong places.

“We taste something fatty and something sweet, we get an immediate signal saying ‘yes I want more of that,’ because for our hunter or gatherer ancestors—and that goes right up to a few hundred years ago—anywhere you can find sugar or fat, that meant survival, it meant ‘carry forth those genetics,’” Daniel Vitalis, a traditional and wild foods expert, says in the film. “Today, we have so many calorie sources, but we still have the same signals, so we bite into a burger, we get those fats and sugar, and our bodies say ‘yes, more,’ because our bodies are used to behaving in an environment where there’s feasts and there’s famines. The problem is we got feasts like nobody’s business—we just don’t have any famine.”

While we know that we don’t have a shortage of food—any trip to a local grocery store will reveal that—we haven’t been able to shake off our belief that we must eat as much as we can when something tasty is in front of us. In essence, our basic survival instincts have stayed the same, despite the fact that we now live in a completely different environment.

“We’re programmed to put on fat when food is available,” said Dr. Christiane Northrup, best-selling women’s health author. “Now there is a lot of food available, but it’s the wrong kind. So we’ve been programmed for millennia to store up for the winter, but the winter doesn’t come.”

This is a growing problem that’s getting worse every year. Today, over two-thirds of Americans are overweight or obese, and while more and more Americans attempt the latest diets, more than two-thirds of Americans will regain more weight after their diet than what they started out with. We’re so used to the concept of losing weight that we forget that what we put into our mouths, and not just how much of it, is of equal importance.

Our environments have changed dramatically in the last few generations: we’ve grown used to man-made, processed, fast food; we’ve relocated from rural farmland to urban areas, yet we haven’t let our bodies adapt; we see the amount of food around us, but we act as if we’re afraid of starving. This is what’s causing the obesity epidemic, the health professionals and advocates argue in the film.

“We have a processed junk food lifestyle combined with a relatively new indoor lifestyle. Our bodies were not designed to sit at desks under fluorescent lights,” said health journalist and author Mike Adams. “If you do just one of these things, it may not be so bad, but by combining them both, then you end up with a disaster. We have too many calories, not enough nutrients, and not enough use of those calories.”

So what’s the solution? It’s time to listen to our bodies. By continuing the way we are now, we’re starving ourselves while constantly eating. You can try any diet trick in the book, but when it comes down to it, you need to dramatically change your lifestyle if you want long-term rewards. And why wouldn’t you want long-term rewards? Environmental and lifestyle factors play a far greater role in the risk of developing certain diseases than genetics do. If you want to start changing your life, the time is now.