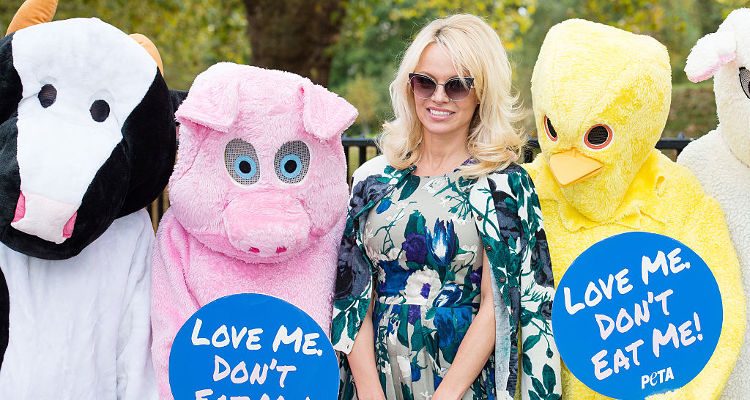 Pamela Anderson recently joined PETA to promote vegan food at Marble Arch in London, England. She walked down the streets and urged people to adopt a vegan lifestyle—she raised awareness about the pain and suffering that animals go through in the meat industry. The Baywatch star posed for pictures with different animal mascots and encouraged Londoners to adopt a vegan diet.

There are many other celebrities apart from Anderson who have turned vegan, and here are a few of them.

He was crowned 2015’s sexiest vegan: “There are no negatives to eating like this. I feel nothing but positive, mentally and physically. I love it,” he told Men’s Fitness.

Lopez has turned vegan and admits to feeling more energetic than before. Butter is the only thing she misses, as it made her meals more delicious.

To look her best on her special day, Simpson went vegan. She stuck to the vegan diet for two weeks, and has been dubbed a “weekend vegan” by PETA.

Jay-Z mentioned on his Life & Times blog in December 2013 that he—along with Beyoncé—would be going vegan. He wrote “On December 3rd, one day before my 44th birthday, I will embark on a 22 Days challenge to go completely vegan, or as I prefer to call it, plant-based!!”

Michele was honored by PETA in 2010 for her charity work with animals. Michele turned vegan for the health benefits as well as to promote animal rights. She believes in being good to her body and to the planet. She admits to being a foodie, but says there are many delicious vegan food choices.

Leto and his bandmates are also vegan; Leto said they used to sacrifice goats before shows, but now they sacrifice tofu!

Deschanel has been vegan for a long time and is also a supporter of animal rights issues. She believes she has a special talent for turning her co-star’s vegan. Initially, David Boreanaz , made fun of her for being a vegan, but once she shared her vegan food with Boreanaz, he began eating vegan once a week.

The handsome hunk is campaigning for Greenpeace and PETA, and is also a proud vegan.

Cyrus has been a vegan since 2014, and has expressed her love for animals by being extremely vocal about animal rights on her social media accounts.