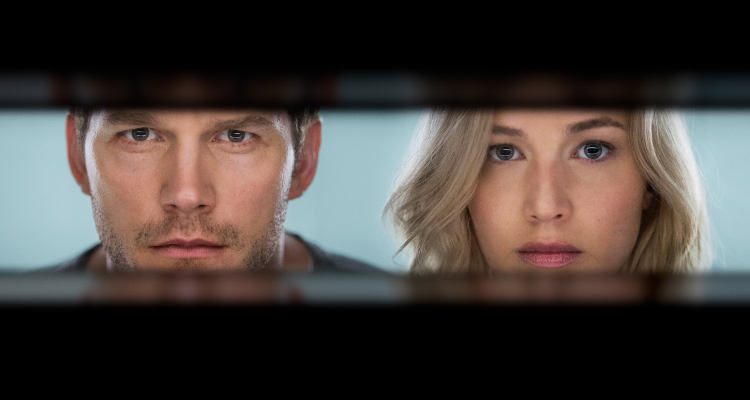 Chris Pratt and Jennifer Lawrence both look amazing in the Passengers trailer, which is their new science fiction film where they star opposite each other. Fans will have to wait until Christmas to see the film.

Pratt has developed into a big star recently, with major roles in Jurassic World and Guardians of the Galaxy—for these films, he lost a lot of weight and bulked up.

On the Stephen Colbert show, he joked that he missed “Fat Pratt” as he lovingly referred to himself, and said that he is not gone forever. His wife, Anna Farris, prepares a lot of home cooked meals, and the father of one says he can’t enjoy them as much as he usually would. Farris apparently misses Fat Pratt too.

The Jurassic World actor, 37, initially lost 60 pounds in 2014 to play the role of Peter Quill in Guardians of the Galaxy. Pratt says cutting beer out of his diet had a lot to do with that weight loss transformation, though the intense workout regimen he underwent—which included running, swimming, boxing, and kickboxing—contributed greatly. Chris Pratt shirtless is something many people like to see in his movies now.

For Jennifer Lawrence, 2016 is looking promising, especially since she likely has a new blockbuster hit on her hands. Lawrence is heralded as one of the most talented actresses in Hollywood at the moment, and has worked opposite many famous leading men, including Bradley Cooper and now Chris Pratt.

Lawrence has never had a super skinny frame, and nor does she want one. She loves food and knows that being too thin can be harmful.

That being said, she had to get an athletic body for her role in The Hunger Games, where she basically sported a blue body suit that showed off every inch of her figure. For that role, she followed a strict diet and workout routine. Jennifer Lawrence movies are almost guaranteed to be hits, so looking good in them is important.

Because she doesn’t necessarily love working out, the best thing for this actress is to break up her routine throughout the day, rather than having one long stretch of activity.

Her exercises are done in bursts of about 20–30 minutes, starting with walking or jogging in the morning and then moving towards more challenging tasks—like high intensity interval training—later on in the day. That’s the extent of her fitness secrets, and it seems to work for her.

Lawrence prefers to do bodyweight exercises, such as squats, pushups, and planks.

She also does yoga regularly in order to keep her body limber, and it also helps her improve her ability to do the stunts she is required to perform.

Lawrence’s diet in the past consisted of junk food and pizza, but it is reported that she is now following a mostly vegan diet and has cut out all the processed food and junk from her diet.