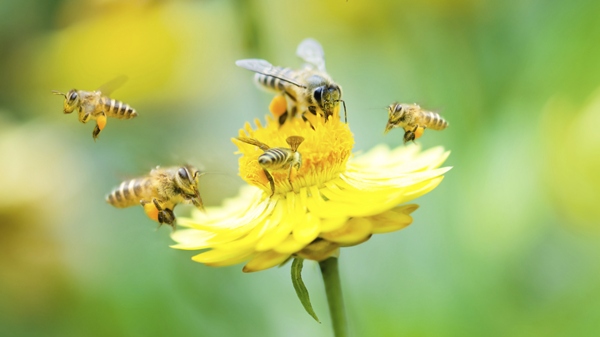 Mahatma Gandhi once said, “Be the change you wish to see in the world.” The Center for Food Safety (CFS) is among several organizations that want you to ‘bee’ the change by saving the bees in the U.S.

There has been a steady decline of bees and other pollinators since 2006, leading to U.S. congressional representatives Earl Blumenauer (Oregon) and John Conyers (Michigan) to start the Saving America’s Pollinators Act (H.R. 2692). This act requests the suspension of the destructive bee-toxic pesticides neonicotinoids, until a full review of scientific evidence indicates they are safe. They also want a field study conducted to ensure there’s no harm to pollinators before the neonics are cleared as safe.

The call for action was prompted because the U.S. Environmental Protection won’t ban the toxic pesticides, and will review them for five more years. Will this be too late?

It seems we’re lagging behind our European counterparts. Based on recent research, including university studies and reviews, the European Union (EU) officially stopped using three pesticides, imidacloprid, thiamethoxam, and clothianidin, for a two-year trial suspension period.

After the two-year period, the ban will be reviewed, taking into account any new scientific information. The ban was much needed in Germany, as environmental group Greenpeace states that up to 30% of bee colonies will be dead before the end of winter.

Why We Can’t Live Without Bees

Bees are incredibly vital to biodiversity, more than any other animal. The insect that has been around for millions of years is responsible for pollinating nearly 80% of all vegetable, fruit, and seed crops in the U.S.

Bees pollinate 130,000 plants, including fruit trees, nut trees, among many others. This translates to one out of every three bites of food that we take are because bees pollinate 71 of the 100 crops—which make up 90% of the world’s food.

The bees also produce honey, which contains every life-sustaining substance. This includes vitamins, minerals, enzymes, and water. It’s also the only food that contains the antioxidant pinocembrin, which helps improve brain function.

Neonics are considered hazardous for bees, disrupting the immune system and their sense of orientation. This is why many scientists argue a U.S. ban would definitely help reduce the steady decline of bee colonies.

Annual bee colony losses because of neonics are anywhere from 40-100%, as reported by U.S. commercial beekeepers. The insecticides also killed 50,000 bumblebees in an Oregon parking lot earlier this year. What more evidence does the EPA need?

Neonics are the top used insecticide worldwide, which made the E.U. ban a highly controversial topic.

How Can You ‘Bee’ the Change?

CFS is a non-profit organization that works to protect human health and the environment, and regularly advocates organic and sustainable agriculture.

Many organizations like CFS are asking the public to support the Saving America’s Pollinators Act (H.R. 2692) by sending a letter to your congressional representative. A letter has kindly been started for you on the CFS web site.

You can also take more action by sending a letter to U.S. EPA administrator Gina McCarthy. To send your letter, visit the Save Bees Organization at http://save-bees.org/.