Home > Celebrity Workouts > Playing or Not, Maria Sharapova Likes to Stay in Shape 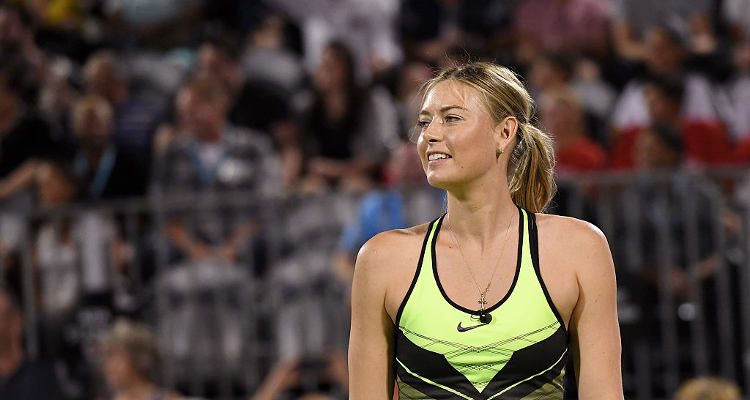 Maria Sharapova will return to the tennis court on April 25, 2017 after her two-year suspension for doping, which was shortened by nine months after her appeal. While on suspension, she was off vacationing and was recently spotted on the island of Lanai over the New Year. She flaunted her bikini body in a black bikini as she soaked herself in the ocean water.

Despite being off the the courts for some time, she is still in great shape. What is the secret to her fabulous body? Read on to know how Maria Sharapova keeps in shape.

Sharapova cannot afford to miss working out. She says not working out for more than three days makes her lose muscle mass and so she works out with complete dedication. She trains five or six times a week for six hours a day with her trainer, Yutaka Nakamura.

The tennis pro starts her routine with stretching followed by a light jog along the beach side. For the next two hours, she plays tennis, engages herself in core exercises, cardio, Pilates, and interval sessions on the bike or on hills and sand dunes. In addition, Sharapova also practices circuit training and strength training twice a week and takes up salsa classes.

She is a morning person and starts her workouts as early as 7:00 a.m. She recently uploaded a pic on Instagram of her doing a yoga pose. She captioned it, “Easiest pose I could find that looks like I know what I’m doing at 7am.”

She also ensures she relieves her tired muscles and relaxes herself with sports massage therapy, ice and hot baths every week. She uses Epsom salts and lavender essential to help soothe her body.

Sharapova also posted this video on Instagram as she sweats it out on the Soulcycle. She captioned it, “Jerome really knows how to make me feel like I’m no longer on vacation. It’s back to the grind.”

Jerome really knows how to make me feel like I'm no longer on vacation. It's back to the grind. ??

Her sculpted physique can be credited to her intense workouts and she is obviously getting ready for the international competitions.

A healthy diet also helps to keep her in shape, but Sharapova confessed to never counting any calories. She also said, “I do weigh myself, though, to make sure I’m hydrated before matches because I sweat so much.” She continued, “Water is a huge part of my diet. I have to force myself to drink it.”

Maria Sharapova keeps herself away from gluten and consumes protein-rich foods. She likes to have borscht which is a soup made with lots of veggies like beetroots, cabbage, carrots, onions, potatoes, and tomatoes and has it with meat and sour cream. She also likes to eat fish tacos with spicy sauce and guacamole. Sharapova loves to indulge in her own premium line of gummy candies, Sugarpova.

Lunch: She has a soup made of tomato with vegetables and chicken breast. Although she doesn’t count calories, she refrains from junk processed foods and drinks green juice instead.

Dinner: She eats fish, rice, and vegetables for dinner.

Maria Sharapova’s fans are very much looking forward to see their favorite tennis star back on the court.