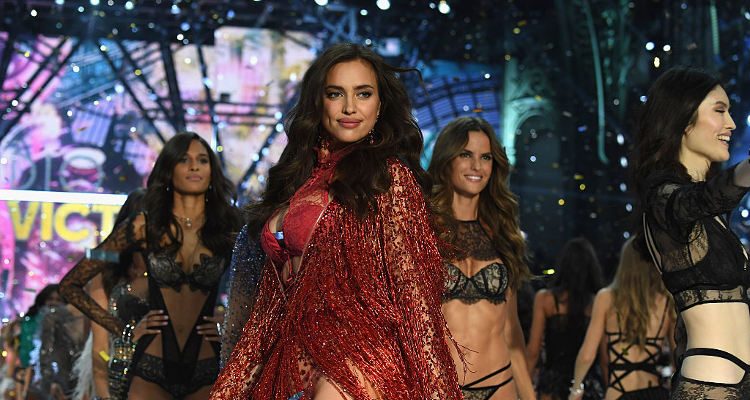 Russian model Irina Shayk is reportedly pregnant with her first child. The 30-year-old Russian beauty, who is dating Bradley Cooper, did very little to silence that rumor after her debut at the Victoria’s Secret Fashion Show 2016 taping in Paris Wednesday night. Irina Shayk’s baby bump was on full display backstage.

Irina Shayk made her debut at the annual fashion show alongside Camille Rowe, Alanna Arrington, Bella Hadid, Dilone, and Jourdana Elizabeth. Shayk walked the runway at the Grand Palais while keeping her stomach covered in a sparkling red tasseled jacket.

Following a quick change, Shayk donned the stage in another stomach-concealing look that featured a trench coat with high-waist undies and a blue push-up bra.

After the show, the models posed backstage for the camera in tiny and barely-there clothing. However, Shayk wore a sexy black-and-white and loose-fitting monochrome negligee, which was perhaps an effort to shield her pregnancy.

It seems that Shayk’s wardrobe choice was perfect to help mask her figure. But the main focus of Shayk’s look appeared to be her eye-popping cleavage. The lace-trimmed bust busting cups gave Shayk’s top half of her ensemble a big boost while thick straps supported her cleavage.

E! News reported that Shayk is in her second trimester and is very excited about becoming a first-time mother. The brunette beauty also revealed in an interview with Hello! magazine that wanted children sooner than later.

Shayk also says that while there isn’t a perfect time to have a child, it is more important to have the right person by your side. Shayk and the 41-year-old Bradley Cooper began dating in April of 2015 and have kept a rather low profile lately. Despite rumors of a break-up early in 2016, the couple appears to be going strong while living together, and with a child on the way.

The mother-to-be and model will likely not worry about the extra pregnancy weight, as she typically eats the right foods and has a regular workout plan—although her exercise routine will likely be lighter than normal. Here is a brief look at Irina Shayk’s diet and healthy lifestyle.

What is Irina Shayk’s Healthy Diet?

Although Irina Shayk’s workout routine is likely lighter now, she has previously hit the gym daily to maintain her toned figure. Shayk avoids exercises that make her body too muscular while focusing on cardio with running and cycling as well as boxing and Pilates.

Shayk has also tried martial arts training like ju-jitsu, which is also a great cardio workout. The model gets bored quite easily and, therefore, likes to try different types of exercises every so often.

Although Shayk—and, therefore, her baby—has good genes, it definitely helps the model to have a solid diet and exercise plan. This will not only help her, but the baby on the way as well.