Home > Food Facts > Quinoa vs Rice: Know the Difference in Nutrition and Benefits 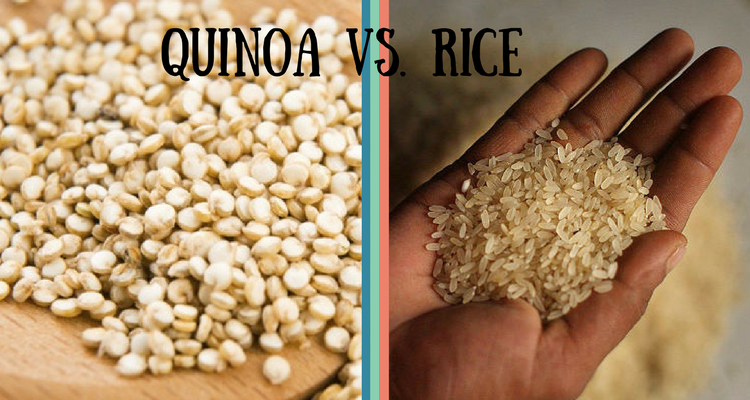 Quinoa is a gluten-free food that has a slightly nutty taste and aroma, and can be used as a replacement for steel-cut oats and rice without compromising on taste. Quinoa flour can be used as a gluten-free option for making cakes that have a softer texture. Rice is used to make products such as rice flour, rice bran oil, rice syrup, and rice milk. So, is quinoa better than rice? To answer that question, we have to do a quinoa vs rice comparison.

Brown rice refers to the rice grain after the hull is removed. When brown rice is polished and milled to create white rice, it results in the loss of vitamins and minerals. Brown rice takes longer to cook and digest than quinoa. Let’s take a closer look at their nutritional differences.

The glycemic index of white rice is higher than that of quinoa. White rice has a GI of about 70, whereas that of quinoa and brown rice is 53 and 50 respectively.

Quinoa vs Rice: The Health Benefits

Quinoa is a food with high nutritive value. Rice also has many essential vitamins and minerals. Here are some of the health benefits of quinoa and rice.

Quinoa contains more dietary fiber than brown rice. Consuming fiber helps slow digestion and prevents cravings which helps with weight loss. It makes you feel fuller for a longer time, and has fewer calories for the same amountof food. Brown rice is also recommended by dietitians for weight loss.

A study published in Food Chemistry says that quinoa has anti-inflammatory abilities and is good for the gut. In rats, the polysaccharides in quinoa showed gastroprotective activity against acute gastric lesions. A study published in the Chonnam National University medical journal states that fresh rice bran and its oil have a gastroprotective effect.

Rice and quinoa are both gluten-free. Studies published in Food Chemistry show that consuming quinoa instead of other gluten-free ingredients such as refined tapioca, corn, potato, and rice flour can increase the nutrient and antioxidant value of the diet.

Whole grains such as quinoa and brown rice have potassium, which reduces the risk of high blood pressure and blood vessel damage.

Quinoa has higher and better proteins than most grains. It has significantly greater amounts of both lysine and isoleucine than rice. These amino acids serve as a complete protein source. Rice also has a significant amount of lysine. Lysine increases the absorption of calcium and eliminates its excretion by the kidney. Lysine also helps in proper growth, and helps in the production of carnitine, which helps convert fatty acids into energy.

According to The American Journal of Clinical Nutrition, increased intake of whole grains may protect against coronary heart disease (CHD). About 28% of quinoa’s fatty acids come in the form of oleic acid, which is a heart-healthy monounsaturated fat. Eating brown rice may also reduce the risk of heart disease and obesity.

A study from the Journal of Food Science states that the bran of brown rice contains many powerful antioxidants. Brown rice helps to increase the blood antioxidant levels in obese women. Quinoa also has beneficial antioxidants. Antioxidants protect the body against heart and eye problems, as well as immune system problems.

Fiber is very important for gut health. People suffering from chronic constipation are relieved after increasing their fiber intake. Brown rice and quinoa both have a good amount of fiber that helps fight constipation. This in turn helps cardiovascular health and the digestive health.

Quinoa vs Rice: Which Is Healthier?

Quinoa provides a good amount of proteins and is a good option for vegetarians. It takes only 15 minutes to cook and cooks faster than brown rice, which takes 45 minutes. Quinoa does not oxidize and lose nutritional value after steaming, simmering or boiling.

Rice contains arsenic. According to the Environmental Protection Agency, inorganic arsenic is a carcinogen which humans are exposed to mainly through food. As per The Food and Drug Administration, rice absorbs arsenic more easily than other foods. Although the arsenic level in rice is very low, consumption in excess may cause health concerns. A study published in Molecular Nutrition & Food Research says brown rice has an antinutrient called phytic acid which interferes with the absorption of iron and zinc from the same meal.

In conclusion, our quinoa vs rice comparison shows that both grains have their own health benefits. Moreover, they must be consumed accordingly.