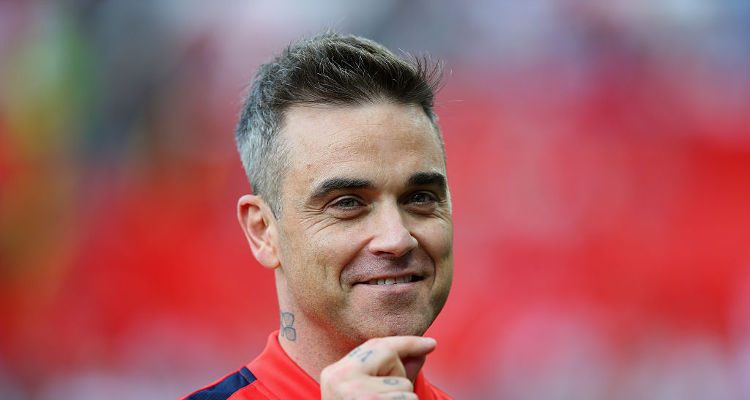 Robbie Williams has long mesmerized his fans with his singing talent, and he continues to do so with his “Party like a Russian” video. He is a larger-than-life character both on and off stage.

The star previously suffered from mental and physical health issues and smoked three packs of cigarettes in a day. After a two month’s break from his 2015 “Let Me Entertain You” world tour, he reportedly packed on some pounds.

He was never known to eat healthy and exercise. His lifestyle drastically changed, and he started hitting the gym and following a healthy diet. He has transformed himself such that it seems fitness is infused into every part of the singer.

Williams indulges in cakes and crisps when he is not performing. He opts for light exercises and thus, puts on lot of weight. To get back in shape, he has to struggle when he is not on stage. He has found a way out of it by devoting himself to rigorous workouts a few weeks before his shows begin.

He does have some indulgences but now consumes a healthy diet. His current diet is said to include fresh fruit juices and protein shakes. Williams relied on them in the past, too, and they have given him good results.

Below is a sample diet plan to maintain your physique.

Williams has now become a gym freak, and he practices weight training. He has combined high-intensity circuits and weight training as part of his workout. Now he practices Bikram yoga twice a week. His yoga regimen is comprised of 26 poses performed in a room heated up to 104 degrees Fahrenheit.

Williams told British magazine Shortlist, “At the minute my addiction is working out. I’m [obsessed] with weights and cardiovascular and my wife’s worried. I’m going on YouTube and figuring out how to do interval training better, but I’m also addicted to Minstrels and prawn cocktail crisps, which offsets the good I’m doing.”

Williams heard about golfer Darren Clarke’s transformation, where he shed about 63 pounds. Soon he got in touch with Clarke’s trainer, Jamie Myerscough.

The Irish fitness guru flew to LA and installed his equipment in Williams’ home. Myerscough trained with Williams for at least six months. Williams’ wife and mother joined the training, too.

Williams eventually achieved his goal of shedding pounds before the Australian leg of his “Let Me Entertain You” tour. His dedication kept him fit, and the singer is looking more muscular than ever in his “Party like a Russian” video.

Sources:
Bee, P., “How to get a six-pack like Robbie Williams: Secrets of an A-list body,” Daily Mail web site, September 25, 2012;
http://www.dailymail.co.uk/health/article-2208105/Robbie-Williams-pack-Secrets-A-list-body.html