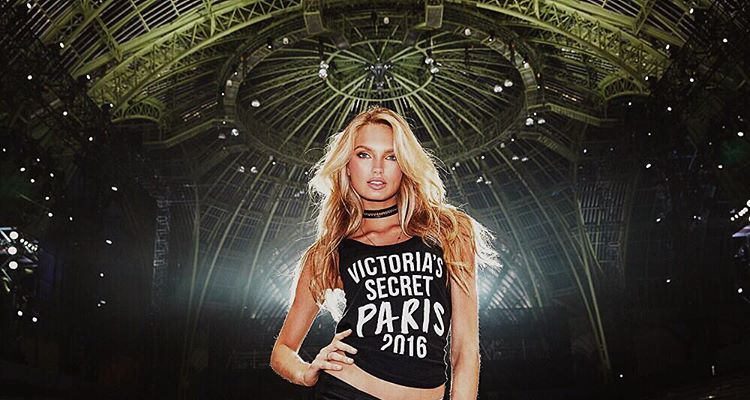 Dutch model and one of youngest Angels, Romee Strijd, looked sensational at the Victoria’s Secret Fashion Show 2016. The stunning model catwalked the celebrated runway on Wednesday, November 30 in Paris, France. The other models who catwalked were Luma Grothe, Flavia Lucini, and Izabel Goulart.

The 21-year-old model looked stunning in her outfit during her fittings for the VSFS 2016.

NEW | Romee Strijd in her outfit during her fittings for the VSFS. #vsfs2016 pic.twitter.com/asP9uEScg3

Strijd was donning a white lace bra and a pink robe in this photo, and she looks like she’s enjoying her time in Paris.

While the model is all set to embrace her experience, she is also geared to have a good time relaxing in the City of Light. She told Harper’s Bazaar during a nail-art session just before the show, that she would love to eat crepes with Nutella in Paris. She was with her BFF, Taylor Swift. Strijd probably has an occasional food indulgence, but apart from that, she follows a healthy diet plan to stay in shape.

How does the stunning Dutch model maintain her fitness? Does she have a food plan? Read on to find out how VS model, Romee Strijd, maintains her super fit body.

The stunning model likes to have multiplicity in her fitness regimen to maintain her super fit body. She told Elle, “I really like to mix it up.” One day, she would do a group class with her friends. The next day, she would try and incorporate workout sessions with her personal trainer, Michael Olajide Jr., and on another day workout by her self. Her multiplicity in her fitness regimen is also confirmed by her Instagram feeds. For example this video which shows Strijd working out on a Bosu ball.

For the group classes, she heads to Aerospace Gym. She also heads to SLT for her workout regimen. Her workouts would include jump roping, resistance training with sliders, and barre classes. She said that barre classes are her favorite and said, “I go to The Bar Method in Soho–it’s really nice. It burns!” The model likes to post her workout videos. She posted this video in which she is seen engaged in an intense workout session.

Here is another video in which the model is seen exercising with dumbbells. The model also likes to include some light weightlifting.

She loves boxing workouts and also includes Pilates and yoga in her workout routine. When she finds time, she attends Mary Helen Bower’s 7:30 p.m. Ballet Beautiful live virtual fitness classes and tries to sync up to do some ballet on her own.

Strijd is health conscious, even though she does not follow a specific food plan. She likes to prepare her own breakfast bowls and brunches and prefers to eat healthily. She tries to include vegetables, lean protein, and nuts in her diet.

The model stays away from processed foods and says, “I feel better when I eat healthy stuff.” Strijd loves to indulge in her favorite healthy food snack—banana bread. Here’s her version of banana bread.

The model prefers to take off her makeup by using water, and she may also use Bioderma Cleansing Water. A typical day would begin with a splash of ice cold water when she wakes up, followed by using Embryolisse to moisturize her skin and Rosebud salve for her lips.

When it comes to touch-up tools, she told Glamour, “I always carry around a small Embryolisse moisturizer, my Rosebud salve, and eye-drops–because [the VS Angels] fly so much…” She continued, “I also carry the Charlotte Tilbury bronzer and her mascara. I really love her makeup. The matte lipsticks are my favorite.” She also admits that she learns a lot of beauty tips from VS model, Jasmine Tookes.

Dutch model, Romee Strijd, is in high spirits and truly embracing the Victoria’s Secret Fashion Show experience. Her committed approach to maintaining her super fit body is encouraging and worth adopting.