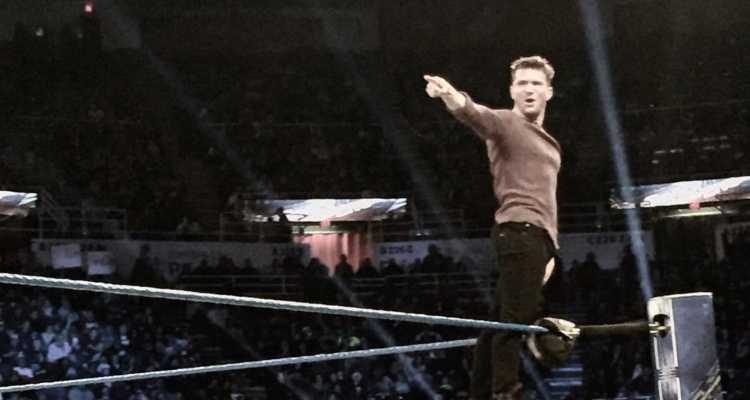 American actor Ryan Phillippe’s Instagram was the first to reveal the big news to the world. Standing atop a boxing ring rope, Ryan was seen with fans screaming in the background. He captioned it “Good night” and his fans and followers went crazy over the post.

It received 1900 likes and over 50 comments with fans of the star curious to know more on the actor’s appearance in the show.

The “Shooter” star later revealed that the ring was at the SmackDown Live, one of WWE’s most popular shows. He put questions to rest when he revealed that he was just a guest featured on the show. However, Ryan instantly connected with WWE Superstar Mojo Rawley during his appearance and the duo even had a couple of pictures clicked thereafter.

Mojo and Ryan went on to discuss about Randy Orton who had starred on Ryan’s USA Network Drama. “Randy is a bit of different dude these days than when he was on the show ‘Shooter,’” claimed Mojo Rawley.

What followed was a meeting with Curt Hawkins, another WWE superstar. Ryan then went and sat outside the ring, eager to watch the match between Mojo and Curt. After the match, Ryan went into the ring to celebrate his friend Mojo’s success and wish him luck.

Ryan Phillippe, the five feet nine inch actor with gorgeous blue eyes is well-known for his stunning physique, too.
The actor takes his fitness inspiration from WWE Superstars and claims that good health, eating clean and being fit is something he cannot do without. “I like feeling strong. Working out has become about functionality. I want my head clearer, I want to feel capable and strong.

It’s simple, when you eat badly, you suffer,” claims the “MacGruber” star. For his routine exercises, Ryan follows a strict schedule. He ensures he does cardio exercises and heavy weight training along with plyometric. Thrice a week, Phillippe does circuit training i.e. every one day between his regular workouts. He follows a method of taking a thirty second break between each of his workouts and a two minute break between circuit trainings.

The second set comprises of wide grip pulldowns, close grip chin-ups, dumbbell lunges, split jumps and hanging leg raises. He performs the circuits with a fifteen to twenty repetitions of each exercise, twice.

Along with this, Ryan also ensures a good warm-up session before he starts any workout. He starts by running for two miles, followed by three sets of crunches with twenty repetitions. Ryan’s workout helps him build muscle and burn fat and alternates as an excellent means of cardio, too.

Ryan consumes a low caloric, balanced diet which covers the daily caloric intake in regards to his height, weight and age. His diet limits the intake of fats, since fats add up to the amount of calories consumed.

Ryan states that his diet is very healthy and is also effective in loosing and maintaining one’s weight at a certain number.