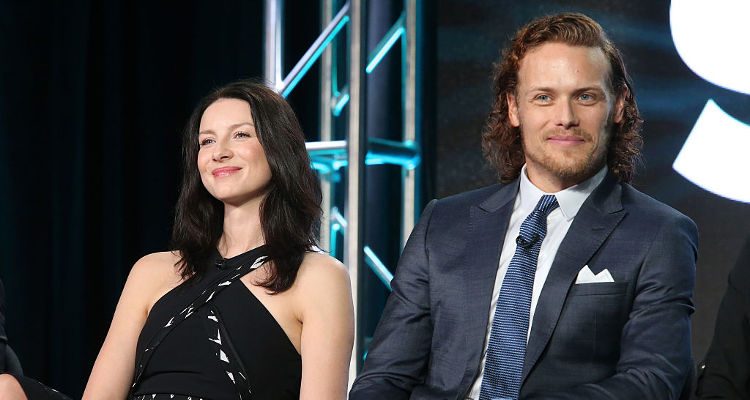 Sam Heughan, and on-screen “wifey,” Caitriona Balfe, look stunning and super fit. Many of their fans are anxiously waiting for Outlander season 3 which is set to premiere in 2017. With Season 4 also confirmed, Outlander fans have a lot coming their way.

Toned and super fit, Heughan and stunning Balfe, may be working with a new cast member in the upcoming series. While producer and writer, Matthew B. Roberts, has not shared details of the upcoming episodes, he took to Twitter and tweeted, “Chilly mornings are here for awhile. But #Scotland has been verra kind to #outlander in 2016. Thx to ye!”

Chilly mornings are here for awhile. But #Scotland has been verra kind to #outlander in 2016. Thx to ye! pic.twitter.com/4xcljv282E

Actresses, Hannah Jones and Tanya Reynolds, will be joining the upcoming season of Outlander as confirmed by this tweet.

Outlanders, let's raise a glass to @Hannah_james_44 as Geneva and @TanyaLReynolds as Isobel. We welcome them to the #Outlander family. pic.twitter.com/qJLqwSzKH7

The series is based on the books by author, Diana Gabaldon, and it is reported that Heughan and Balfe will be working with new members. The cast will be filmed on a sea voyage for most of the episodes in the season.

While fans are all set to travel back in time and join the star cast in the upcoming season, rumors are rife that Heughan and Balfe are dating and having an off-screen relationship. It is reported that the actress has been impressed with her co-stars muscular and ripped looks. The co-stars look stunning together and it is no wonder that there are rumors on their alleged budding relationship.

To get into Highland warrior shape, six-foot-three-inch Heughan had to hit the gym. Before filming began, Heughan was around 82 to 84 kilograms (180 to 185 pounds). He told Men’s Fitness, “ I was doing a lot of running; I ran for a charity team and did a lot of marathon running, but I had to look a bit bigger and I needed to look like someone who could take care of himself. He (Jamie) is an outdoors man and a warrior.”

To look impressive for his on-screen role as Jamie, Heughan, spent six weeks in London at a CrossFit gym. His fitness regimen was designed by a trainer who helped him with the necessary deadlifts, Olympic lifts, and conditioning. This helped the actor achieve his ripped looks and an enviable physique. It is no wonder that there are many fans are not only drooling over his looks, but also following his fitness regimen on the Internet.

Heughan loves running, and is a veteran of several half and full marathons. The actor also required to look lean for scenes where Jamie gets captured and is put in prison. To achieve a leaner look, the actor incorporated Paleo workouts to his routine.

Heughan has impressively maintained both losing weight and gaining weight for his on-screen roles. For the second season of Outlander, Heughan hit the gym to fiercely pack 15 to 20 pounds of muscle to get back into Jamie Fraser shape. In season 3 the characters, Jamie and Claire, will be getting older, and Heughan said, “I’m going to take it upon myself to age ungracefully. I think Fat Jamie is what everyone wants to see.”

To compliment his Highland warrior workout regimen, Heughan, tried to keep his diet clean. His diet included sweet potatoes, chicken, and peanut butter. These are staples which helped him with muscle growth.

He also admits that while shooting, his weight varied. He said, “ … when you are on location … good nutrition can be hard to find.” He started taking supplements and carried protein bars which would supply his body with the essential nutrition and give him his required look.

Balfe fans are amazed at her stunning and super fit looks as she plays the role of Claire in Outlander. Though there is not much known about Balfe’s workout regimen and diet, the actress is reported to have healthy eating habits. Her breakfast includes smoothies, avocado, and coconut with maca and bee pollen. She also likes to treat herself to meat once a week and includes fish and veggies in her diet plan. She admits that she believes to have everything in moderation. When it comes to her workout regimen, she likes to surf, hike, and also do yoga.

Outlander fans are all set to time-travel in 2017 for some action-packed romance with the release of season 3. Fitness enthusiasts who wish to stay in super shape can try adopting the fitness regimens of Sam Heughan and Caitriona Balfe.