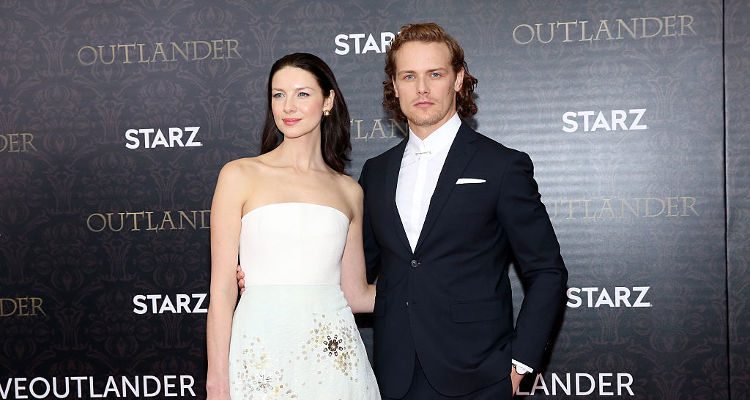 Sam Heughan and Caitriona Balfe are staying super fit for Outlander season 3. The sexy co-stars who play Jamie and Claire Fraser on screen have undeniable chemistry. So much chemistry, in fact, that there are rumors that the two are dating off screen and, get this, even considering marriage!

Although they are both keeping quiet about their private lives, one thing is for sure; they both look amazing and they are happy to share their fitness regimen with fans. Read on to find out how they stay in great shape.

Sam Heughan tends to his fitness in different ways and it’s actually a priority for him. He enjoys cardio workouts like running and doing CrossFit. He also participates in marathons, and his most recent accomplishment was finishing in one hour and 27 minutes, which he flaunted on his Instagram. He also does Thai kickboxing, known as Muay Thai, and works out with a personal trainer.

Heughan is currently endorsing the Scottish clothing brand Bourbour while season 3 of Outlander is underway. Because of his busy career life, he needs to stay healthy and strong, and he does this by going to the gym frequently. He especially likes running for a good cause.

He doesn’t follow a particular diet; Heughan eats everything he wants and just exercises a lot to keep his shape. He would work out up to three times a day while shooting for Outlander, and he ate whatever he wanted. Does this mean that Heughan is eating junk food all day?

No, actually he maintains that he only eats clean, nutrient dense foods. He sometimes ate protein bars and took supplements when shooting on location, noting that good nutrition can be hard to come by. However, he has also tried the Paleo diet to get a lean and cut look for his character Jamie.

Although he did not stick with the diet as he found it difficult to follow, he did say it helped. One of his favorite things to eat on set is a cheese toastie, and while he admits he feels guilty after eating it, it’s one of the better items from craft service.

His intense workout and good nutrition has him looking great and his chiselled body and bulky arms are hard to miss. It’s rumored that Heughan may be the next James Bond, although it hasn’t been confirmed yet.

One of his favorite places to visit is Canada. He loves it so much and has been to Toronto and British Columbia, where he drove through the Rockies. When he decides to go back, he’d love to do some rock climbing.

Although Caitriona Balfe’s workout and diet is unknown, it’s not a stretch to assume that she follows some sort of regimen to help maintain her amazing figure. Since yoga and Pilates are often very popular workouts in Hollywood, one can assume that she may do them. There is no doubt she looks amazing and if the rumors are true, Balfe and Heughan make a seriously attractive couple!