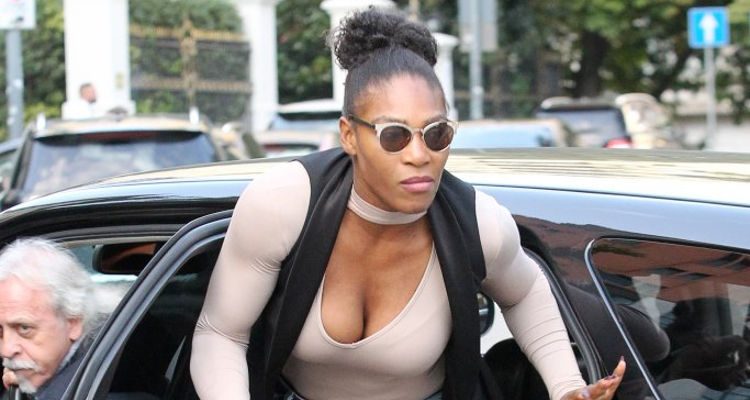 Tennis champ and fashion designer Serena Williams recently showed off her seriously impressive bikini body while on a one-day vacation from her very busy life.

The soon-to-be 35-year-old (her birthday is Sept. 26) flaunted her itsy-bitsy bikini while sitting poolside. The photo highlighted her very impressive back muscles and slim waist.

After all, Serena Williams is one of the top tennis player’s of all-time for a reason. Williams has captured 22 Grand Slam singles titles, including six at the Australian Open, seven at Wimbledon, six at the U.S. Open, and three at the French Open.

Williams is currently tied with Steffi Graf for second of all time with 22 titles and is set to eventually eclipse Margaret Court’s record of 24 gland slam singles titles.

In addition to her toned waist and back, Serena Williams is known for her incredible upper-body strength. In other words, her arms are huge. The good news is that you can achieve similar upper-body strength without having swung a tennis racquet.

Serena Williams’ Nike master trainer Marie Purvis has also helped create her workout, which is featured in the Nike+ Training Club app. It free in iTunes and Google Play.

Serena Williams credits a diet with healthy food for her incredible bikini body.

Her diet avoids red meat, and while she loves tacos, she takes a break from meat and corn when she trains. Williams says she feels bloated after eating tacos.

Williams will focus on nourishing her body for energy and eating to live instead of living to eat. Despite her amazing discipline, Williams will give in to her cravings from time to time and enjoy ground turkey tacos with cumin and paprika.

The tennis superstar has also supported her sister Venus in the past by following a vegan diet.

She also eats cucumber, ginger, mint, wheat grass, coconut water, and a variety of other veggies. Serena also suffers from a gluten allergy, and instead eats brown rice and sprouted quinoa.

How can you build incredible back muscles like Serena Williams?

Her workout plan has also been influenced by Gerard “Coach G” Burley, who is the owner of Coach G Fitness in Washington, D.C.

Some of Coach G’s workouts include knee-to-chest push-ups, planks with a cable, resisted side planks, sprints, and a medicine ball core workout. Williams’ workout will also include yoga, running, biking, dancing, and an elliptical workout.

Want to get arms, shoulders, and legs like Serena Williams?

Plank rows are a key exercise to help fitness enthusiasts sculpt their arms, legs, and shoulders. To do this, you will be in a plank position with your toes tucked under, and use a five- to 20-pound dumbbell in each hand.

Next, keep your hips and chest face down and engage your abs, and lift the left dumbbell toward your chest and bring your elbow behind you. Lower the dumbbell to start and switch arms. Perform 20 reps for the best results.

So, how will Serena celebrate her 35th birthday?

How about with a plank-row workout and some tacos on another one-day vacation. After all, life is about commitment and balance.