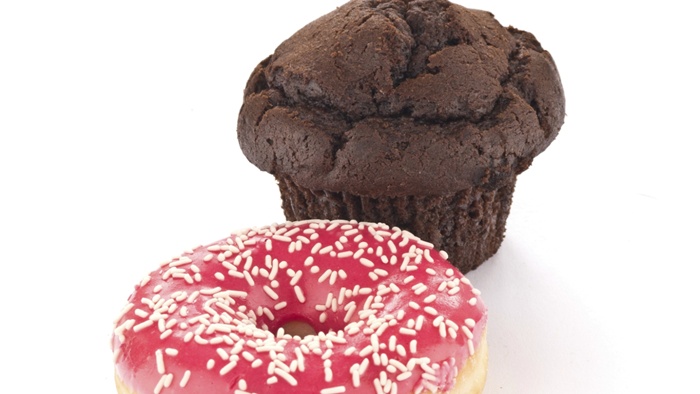 That sugary donut and fattening muffin have been competing for the attention of your morning coffee for years. These sweet treats have been wearing the disguise of being a reasonably healthy addition to your breakfast routine. You may have had a hunch that a double chocolate donut isn’t good for you, but you are so accustomed to the habit of picking one up on the way to work. Muffins and donuts are easy, cheap and portable.

So if healthy is the name of the game, maybe you have considered a blueberry muffin. A little fruit in there should help, right? But is one better than the other in the grand scheme? Let’s take a look at how the infamous donut and muffin weigh in when they go head-to-head in a health showdown.

First Up: The Donut

It probably won’t come as any real shock that donuts are not considered a health food. They are fried, cooked at high temperatures and don’t contain any nutritional value. Your daily donut can contribute to weight gain, heart problems and increased blood sugar levels.

So where do you dunk your donut? The Wall Street Journal reports that last year alone Dunkin’ Donuts weighed in at $4.57 billion in sales with Krispy Kreme sitting in second place at $1.3 billion in sales. With numbers like that, if you consider donuts a guilty pleasure, you certainly aren’t alone. Dunkin’ Donuts has quite the assortment to choose from with 70 donut variations, too. But what about looking at it from a nutritional standpoint? The popular chocolate frosted donut from Dunkin’ Donuts contains 270 calories, 15 g of fat, 13 g of sugar, 340 mg of sodium and 3 g of protein. Ouch.

How Does the Muffin Fare?

You may think muffins baked in the oven are a healthier alternative to the donut. They aren’t. Muffins are still considered a fast food item. McDonald’s is the clear fast food powerhouse around the world and it also sells six popular muffin options, including  blueberry, carrot, golden bran and raisin. Don’t forget the double chocolate with Oreo crumble! These muffins contain an average of 403 calories, 14 g of fat, 34 g of sugar and 383 mg of sodium.

Who Wins the Showdown?

If you are measuring basic nutritional value, donuts from Dunkin’ Donuts contain less calories, sugar and sodium than muffins from McDonald’s. Also, the fat content is very comparable and the muffins generally contain more protein than donuts.

If we are talking about your overall health, both foods will imbalance your blood sugar levels because of all the sugar, fat and sodium. The calories are empty so your body will feel hungry shortly after you have finished eating.

The consumption of commercial fast food like donuts and muffins has also been linked to depression, according to a 2012 research study from the University of Granada. Fast food eaters have a 51% greater chance of developing depression, and even consuming small amounts of baked goods can increase this possibility according to researchers.

There is really no winner in this battle. Both fail! Choose a healthier breakfast option such as a green smoothie with quality protein sources. Protein is a great idea in the morning, but even in the small amounts in donuts and muffins, it isn’t worth all the calories, sugar, fat and other junk that goes along with it. If you want to feel better about your diet, cutting out foods like these is a good first step.