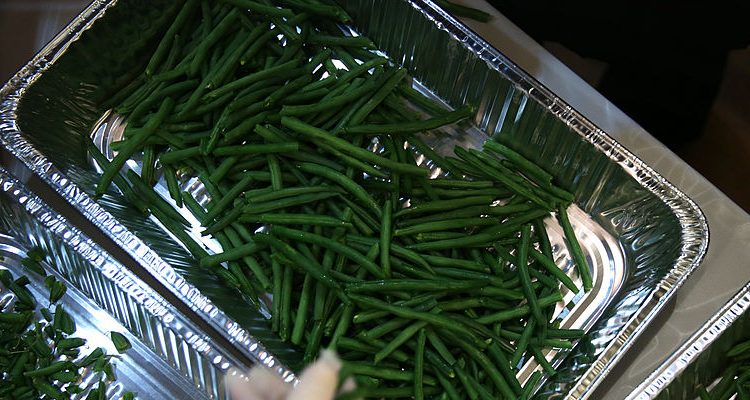 What’s Christmas dinner without a side dish…or five? Some people love holiday meals for the side dishes and not the main big deal, the turkey and/or ham. Creativity abounds at many people’s dinners when it comes to side dishes, with twists on favorites popping up here and there.

But sometimes a traditional dish hits the spot and is looked forward to every year, and one of the top spots for Christmas dinner dishes belongs to the much beloved green bean casserole. And according to Google, the most trending recipe of 2016 in the US (most searched for) is green bean casserole. For real.

It’s a dish that you either love or hate, but those who love it will go on and on about it, as will those who loathe the warm bean dish. A love of green beans in the first place certainly helps.

If you’re having a vegan Christmas dinner, this is the perfect dish to make, and even if you aren’t, it is a great addition for those who love vegetables at dinner. The second most Googled recipe of the year was Brussel sprouts followed by hash brown casserole.

The traditional recipe for this expected dish at the holiday dinner table is quite simple. You will need a can of cream of mushroom soup, four cups of green beans, ½ cup milk, and a can of fried onions.

Cook the green beans either in the microwave, a steaming basket, or on the stove in hot water. It doesn’t matter how it gets done, but don’t use frozen beans, if possible, because they will get mushy once they cook up in the oven with the soup.

While the beans are cooking, mix the half cup milk with the can of soup in a bowl. Blend well. For a twist on the classic recipe, add a cup of shredded cheddar cheese to the liquid mixture. Combine the beans and the soup mixture together in a casserole dish. Taste for salt, and add more if needed, or add a dash of soya sauce for a more developed flavor. Top with the fried onions. For another twist, on top of this, add a cup of shredded cheese of your choice. Cheddar will be just fine.

If you don’t want to use canned soup and would prefer a more “from scratch” version, it’s simple enough to do. Make a homemade mushroom soup of sorts yourself by quickly doing the following, and then thickening it with flour at the end.

Cut up some mushrooms into small pieces. Fry them in a pan with butter on medium until they start to render and liquid comes out from them. Season with salt and pepper to taste. To this, add a cup and a half of 10% cream. Allow the flavors to meld for about three minutes.

If some of the cream has evaporated, add more. Now add a flour and milk mixture to this to thicken the creamy mushroom mixture. Add some water if it gets to thick. Now use this mixture in place of the soup and follow directions as instructed above. Enjoy!