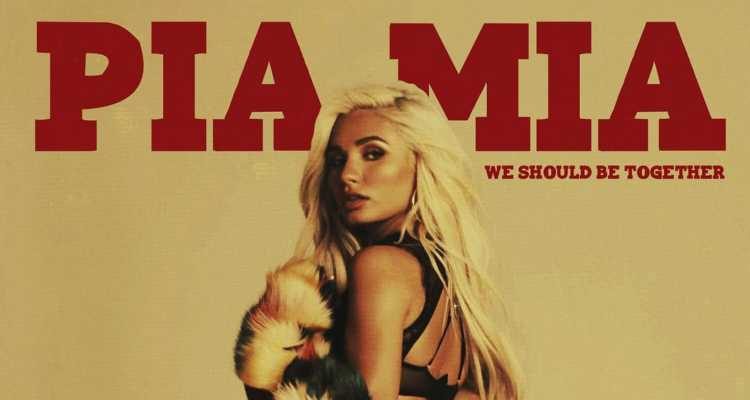 Singer Pia Mia first took it to Instagram to debut the cover of her latest album; “We Should Be Together”. The 20-year-old model-turned-singer donned a skimpy one-piece black outfit and looked chic and sultry. Her slender figure was showcased through the short, backless outfit.

She opted for thigh-high boots and an animal print over-sized coat along with the attire. Her blonde hair was left loose and fell to her shoulders. She completed the look with metallic hoop earrings and minimal makeup.

In another picture on the social networking platform, she flaunted her slender legs and toned body wearing a white crop top, rolled-up shorts and white boots. She appeared to be sitting in the shoe department of Barneys at New York.

She also shared a video of herself working out shortly after that captioned “build the body you want”.  She appeared to be working out in a private gym and showed off her legs and toned derriere in various positions. What followed were a set of squats, leg lifts, bench jumping and pulling on long ropes at record speed. She wore a tight black outfit with her long hair neatly tied back.

We Should Be Together available everywhere now #WeShouldBeTogether link in bio

Popular in Hollywood as Kylie Jenner’s best friend, the duo are often seen shopping and hanging out together, though lately Jenner has been busy with boyfriend and rapper, Tyga.

It all started when she was a 13-year-old shy teenager, who would only sing to herself while hiding inside the family’s dryer. Shortly after moving to Los Angeles with her mother, one of the Babyface producers came up to her and asked her if she was a singer, owing to her rock-star look outfit.

What followed was Pia signing a year-long deal with Babyface and probably the beginning of her huge career. Working with Babyface taught Pia to be in control. “You have to be who you are and know what you want to say. I’ve always been sure of that”, says the teenage singer.

What followed was a huge career break as she went ahead and launched some great songs, working with many well-known names in the industry. The singer states that most of her songs are ‘deeply personal’ owing to her love life and heartbreaks. Today, Mia has over four million fans on Instagram, Kylie Jenner as her bestie and albums with Tyga and Chris Brown. In total, she has written over a hundred and fifty songs!

Lately, she was also chosen as the fashion director for Madonna’s clothing range, sold through Macy’s.

A recent video posted of her on You Tube, shows the young star working out swiftly, owing that she’s no newbie when it comes to gymming. Dressed in a pair of fitting workout pants, a short tee showing her toned abs and matching shoes, the singer has surely given us some serious #bodygoals to look up to.

She is seen doing a range of workouts ranging from squats, lunges, pushups, along with using various gym equipment. Pia Mia also ensures that she follows a balanced diet with her routine workout regime.