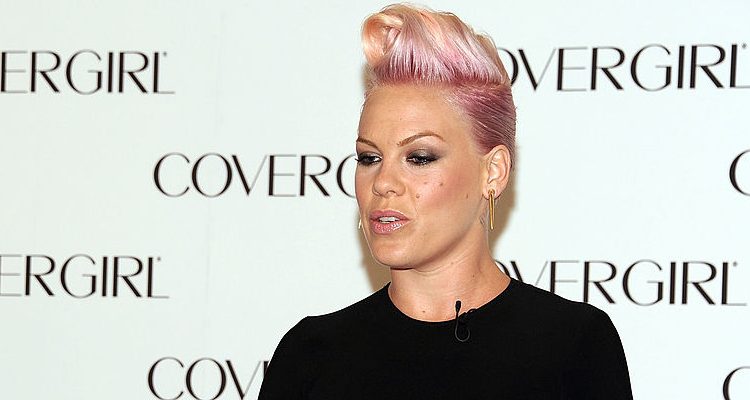 Surprise! Singer Pink is pregnant, and that’s the exact word she used to caption the picture she posted on Instagram last week of her pregnant with her second child with husband Carey Hart. Her adorable daughter Willow was in the picture as well, hugging her mama real tight. No word has been mentioned about a due date or gender of the baby, but from the looks of it, Pink seems to be at least in her second trimester.

Pink is all about body positivity and looking how you want and feeling good about it no matter what others say. She would know because she has faced criticism from the media and fans before over her weight. Last year she was photographed wearing a black dress for the John Wayne 30th Annual Odyssey Ball in Beverly Hills, and many were quick to comment on her weight. The singer admitted the dress didn’t photograph as well in her kitchen as it looked elsewhere, but she took that opportunity to slam body critics.

She took to Twitter over it and had this to say back then: “I can see that some of you are concerned about me from your comments about my weight. You’re referring to the pictures of me from last night’s cancer benefit that I attended to support my dear friend Dr. Maggie DiNome. She was given the Duke Award for her tireless efforts and stellar contributions to the eradication of cancer. But unfortunately, my weight seems much more important to some of you.”

Pink’s Workout: What She Does to Stay So Fit

Pink’s concerts are a sight to be seen because she really puts on a show with her acrobatic dance moves. All that work and effort she puts on stage requires proper fuel to keep her going for the length of her shows. In an interview with Food & Wine magazine, she said, “I eat a lot [on tour] because I work out four and a half hours a day: a two-hour show, plus yoga, cardio, and a rig check with the flying apparatuses.”

But the problem comes when the tour ends, she says, because her eating habits don’t change one bit—even though her physical activity levels drop considerably. What does she do about it? Nothing. “I don’t change my eating when I get home,” she revealed. “So everyone always asks me, ‘What are you going to do after?’ And I say, ‘Get really fat and happy.’”

Pink typically works out five to six times a week for 90 minutes a pop, and that’s not including any time spent rehearsing for shows and then doing the shows. Her workouts are all over the map and pull from many disciplines, including dance, martial arts, and yoga. Combining different practices and workout styles is a perfect way to shape every muscle group and ensure one doesn’t get missed.

And her arms are so well toned and muscular that it should come as no surprise that the singer does weight lifting as well. Cleansing, toning, and good old sweating are also key parts to Pink’s workout, which has her with one of the most fit bodies among female celebrities. She’s a true fitspiration!