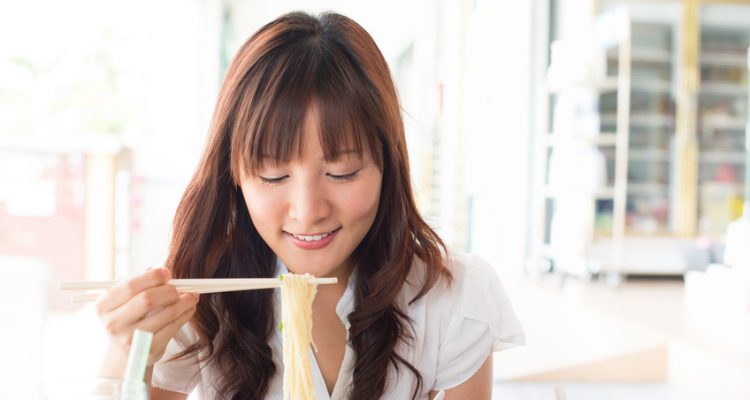 The role that genetics can play in eating habits and weight gain is an interesting field. It’s generally known that certain body types and metabolic traits are genetically linked, but how about food cravings? A study by UCLA researchers has taken a look at Asian Americans and found a genetic variant it believes to be tied to cravings and possible food addictions to carbohydrates or fast food. The study has some interesting results but are hampered by the overall significance is rather murky. Fortunately, the full study is available online without a subscription.

There is a gene, called DRD2, which is suspected of being involved with various types of addictions. The gene can have three variants: DRD2 A2A2, A1A2, and A1A1. The DRD2 A1 variants has been suspected by previous studies of affecting vulnerability to overeating and food addiction due to the way it decreases dopamine signaling, though some have been unable to find an association. The UCLA researchers noted that most past research did not include Asian populations and sought to see if the DRD2 A1 genes affected Asian susceptibility to food addiction or obesity.

The findings are suggestive that the A1 genes could be correlated with more cravings for carbohydrates and fast food among Asian Americans, but little else can be said about what significance there is with regards to food addiction, or clinical approaches regarding obesity. The higher number of obese women by body fat, and the slightly higher power of food scale, is potentially suggestive of women being more susceptible to A1 effects as the authors suggest. However, considering the small numbers involved and the fact that there were almost twice as many women as men, this could just be statistical noise.

One interesting quirk is that the researchers note that the food craving questionnaire, although a validated method, was mostly tested on African American and white participants. Since food preferences are partially influenced by cultural background, it is possible that differences in this area affected how receptive Asian Americans were to foods like fried fish, fried chicken, cinnamon rolls, or gravy, which are among those featured in the study. If this is the case, then it means the food craving questionnaire may not be as reliable as first thought.

The UCLA press release about the study mentions possible benefits to doctors trying to counsel patients and promote healthier eating or weight maintenance programs, but the connection on that end is not very clear either. If someone has cravings, regardless of genetic susceptibility, that would be taken into account when devising plans and offering advice.