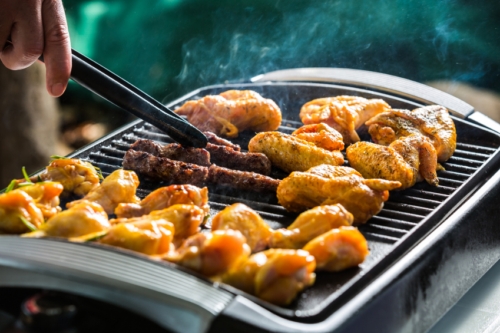 The 15th annual South Beach Wine & Food Festival wraps up today with a smorgasbord of culinary delights at the Goya Foods Grand Tasting Village. Foodies can tantalize their taste buds as they sample bold cuisine and modish wines—all while watching their favorite TV personalities and celebrity chefs slice and dice at the epicurean demo stages.

Nineties TV star Tiffani Thiessen of Saved by the Bell fame, now host of the Cooking Channel’s uber-popular Dinner at Tiffani’s, is expected to show foodie fanatics how to prepare her signature chicken wings. The actress-chef couldn’t wait to share with her nearly 350,000 Twitter followers how excited she was to be in Miami for the event:
“Morning Miami! So excited to be here! #SOBEWFF #DinnerAtTiffanis @ South Beach Wine And Food…”

Another highlight of the sold-out four-day festival—which is expected to attract more than 60,000 attendees and feature some of the best wine and food experts from across the globe—included Friday night’s Burger Bash competition. Hosted by celebrity cook Rachael Ray, the event featured some of the country’s top burger chefs as they competed to prepare the best slab of ground beef.

Attendees sipped on light lager while ogling the mouth-watering celebrity judging panel that included the likes of Travel Channel’s Burger Land host George Motz and actor Neil Patrick Harris of How I Met Your Mother fame.

Oh, and anyone who would like to dine on judiciously curated meat from the country’s prime burger chefs—Jersey Dawg was awarded the best burger award by judges and Iron Chef Masaharu Morimoto won the people’s choice award.