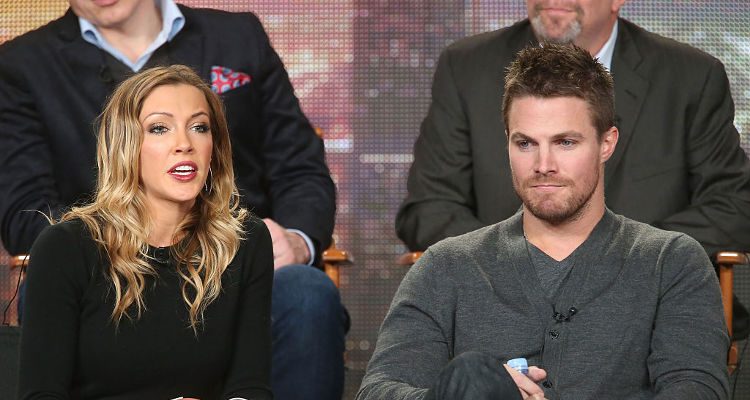 At the end of Arrow’s 4th season, disheartened fans witnessed Oliver Queen and Felicity Smoak calling off their engagement and things weren’t looking good for the couple. But before the new season, Stephen Amell told ET Online that fans can hope for Olicity’s reunion in Season 5.

Emily Bett Rickards feels that even if Felicity and Oliver aren’t romantically involved, their relationship would be better this season. But Felicity has already started dating Star City’s new detective, Billy Malone.

Amid the reunion rumors, Amell and Rickards are focusing on their fitness regimes.

Amell consumes enough calories to fuel him for the grueling workouts. He ensures he consumes clean and healthy calories so that he gains lean muscle and doesn’t bulk up. His diet is a balance of proteins, carbs, and healthy fats.

He consumes adequate amounts of protein to keep him full throughout the day. His sources of protein include meat, poultry, fish, beans, eggs, and whey protein powder. For the fat requirements of the body, he includes coconut oil, avocado, and steak in his diet.

For hunger cravings, he eats a healthy snack rather than grabbing some munchies. He has eliminated processed sugar, gluten, dairy, and beer from his diet.

Amell’s workouts are a combination of body weight exercises and parkour. He also does his own stunts on the show which counts as a workout in itself! He works out three to four times a week, and adds variation to his workout regimen so that his body doesn’t get adapted to the same routine each day.

Workout for Chest, Triceps, and Abs

Workout for Legs and Calves

Workout for Back, Biceps, and Abs

Rickards follows a healthy lifestyle of nutritious diets and workouts. She eats whole grain cereal for fiber and complex carbs. She eats green veggies and sips their juices as well. For the protein requirements of her body, she eats fish like mackerel. Rickards keeps away from junk and processed foods and eats clean. She consumes a lot of fruits, veggies, and nuts.

For the Arrow actress, workouts are both fun and a way of life. She mentions she works out early in the morning and late at night. She admits to working at least twice a day and her weight maintenance is largely due to her trainer and T3 Athletics owner, Thomas Taylor. She also trains with Brady Roberts and loves doing hot yoga, running, and SoulCycle.

Despite shooting for 14 hours on some days, Emily Bett Rickards pushes herself to go to the gym as she believes it helps to keep her focused while working on set. She is in great shape which also helps her perform her own stunts. Growing up, she was very much into gymnastics, so it’s no surprise that she still maintains a love for fitness.