Home > Food Facts > Stock vs. Broth: What Is the Difference between the Two? 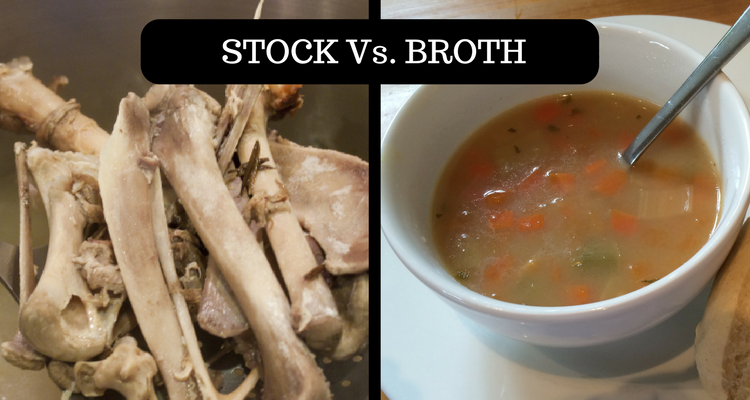 Stock and broth—are they just synonymous and interchangeable terms or is there some major difference between the two? If we compare stock vs. broth, we’ll realize that these are actually two different terms. They may look same to many, but they aren’t. Stock primarily involves bones, whereas broth has meat pieces, vegetables and more.

Both of these are made simmered over low heat to infuse the flavors and nutrients into the water. However, nowadays, both of these have become more or less synonymous even if they are store-bought!

Whenever you make broth, it is necessary to use lots of raw materials, which ensures that your broth tastes delicious and is nutritious. This factor also decides the texture and consistency of the broth.

Stock vs. Broth: Difference in Uses and Nutrition

Broth is made from meat or vegetables, but stock is made from bones. Stock is thick because bones contain gelatin that gives it a thicker texture compared to broth. It is cooked for a longer duration of time and thus has an intense flavor.

Stock is used to make soups or sauces. It is added to recipes and usually not consumed on its own. Also, stock is normally plain and without any seasoning.

On the other hand, broth has a distinct flavor because of meat and multiple veggies. Also, it is seasoned with salt, pepper, and maybe more spices and condiments.

You can have broth on its own, and it is not necessary to add it to recipes, although it is commonly used in cooking. This is the precise reason why it is flavored and seasoned.

Stock derives its flavor from proteins and not sodium. Although you can eat broth on its own, stock has a deeper flavor than broth. Stock is richer and darker in color than broth.

Broth contains a lesser amount of proteins compared to stock. It may or may not contain vegetables, and the flavor is mainly due to the sodium content.

Stock is often used as an introductory food in the Gut and Psychology Syndrome (GAPS) diet. It contains amino acids, like proline and glycine. The protein in stock helps heal and strengthen the connective tissues in the gut.

Also, stock helps in digestion and the secretion of hydrochloric acid to break down the proteins present in the stomach. The gelatin from the stock helps in the optimal growth of infants and children.

Broth contains approximately five grams of proteins per cup, while stock contains less than one gram.

Stock isn’t a finished product. It is usually added to recipes, and so it is left unseasoned. Broth is seasoned, and you can have it on its own or add to recipes.

Many recipes call for stock instead of broth because of the sodium content. Stock is better for people who need to monitor their sodium intake.

If you are making a dish that requires a sauce-like consistency, then you should opt for stock. Otherwise, you will end up having a concentrated salty solution.

For recipes that require cheese, soy sauce, or cured meat, you should use stock. If using broth, you will have to balance the salinity with the seasoned base carefully. However, if you make the broth at home, then you know how much salt you should add.

What is the difference between chicken stock and chicken broth? Chicken broth is made by boiling animal bones in a cooking pot for a longer period. The bones may or may not have meat.

To enhance the flavor and color of the broth, you can even add roasted chicken bones. This method of cooking helps to extract nutrients and flavor. You can also enhance the flavor by adding ingredients such as carrots, onions, fennel, parsley, leeks, celery, bay leaves, black peppercorns, and garlic.

Egg whites may also be added during the simmering process to refine or purify the broth for a clearer presentation. They coagulate when added to the broth and trap the turbidity to a mass which you can strain.

Chicken stock is made from bones and is hearty. The gelatin released by simmering the bones makes the stock flavorful. You can say that broth is a seasoned stock.

Can chicken stock and broth be used interchangeably? Store-bought stock and broth almost refer to the same product in the market. The only difference is one is seasoned, and the other isn’t. You should buy brands that have the least sodium.

Difference between Vegetable Broth and Stock

Vegetable broth is seasoned, and you can have it on its own. It is made by simmering vegetables. Vegetable broth is available commercially and using it in recipes helps save time. However, manufacturers add additives and seasonings during the manufacturing process.

Vegetable stock isn’t seasoned and hence lacks taste. It is added to dishes to enhance the taste and nutritional content. You can add salt and other seasonings as required.

Vegetable stock is basically a flavored and nutritious alternative to water. It forms the basis of sauces, soups, stews, or risotto. If we ignore the seasonings, then vegetable stock and broth are the same.

Now that you know the stock vs. broth difference and nutritional content, you can decide which one to use in any recipe.