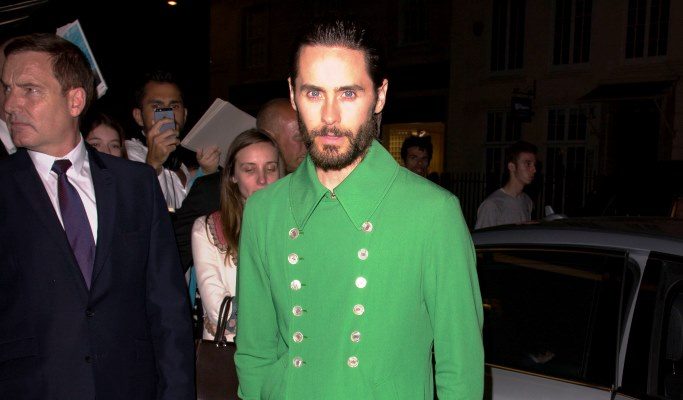 Jared Leto undergoes an incredible transformation to become the Joker in Suicide Squad, but did you know that following a vegan diet helped him achieve it? How did Leto get those jaw-dropping abs and lean physique? Here is the low-down.

In order to prepare for his Suicide Squad role, Jared Leto had to approach his fitness in a different way. Leto is not a fan of weightlifting or going to the gym, but for this role, he did just that. He hired a trainer and his goal was to bulk up and put on muscle mass. He also worked out for a whopping four to five hours per day, five days per week and targeted different body parts each day.

He built his muscle definition by doing four to five reps of heavy weightlifting and higher reps of lighter weights. He also did plenty of cycling, using a steep incline to add leg definition. Although he is a dedicated yogi, Leto had to scale back on the yoga practice as this intense training was all about adding muscle. He also opted for outdoor cardio like hiking.

The 44-year-old did tons of exercises to build his chest, leg and arm muscles, including pull ups, bench presses, push ups, squats, incline presses, leg curls, deadlifts and curls. All the cardio and major sit-ups were his abs workout, and do they ever look ripped!

Jared Leto Bulks Up on a Vegan Diet

The Thirty Seconds to Mars frontman has been a vegan for several years. For the Joker role, he had to put on weight and that meant eating every few hours. One of the challenging parts of his preparation was finding appropriate sources of protein in order to build and repair muscle from training so intensely.

Leto could not eat the typical high-protein foods like steak, eggs or chicken, so he found plant-based sources of protein as a substitute. He also consumed a lot of organic vegetables and fruits, which are packed with vitamins and minerals that support the body. He was sure to avoid all processed foods, junk, alcohol and sweets.

He took the energy to perform his workouts from carbs like whole grains, rice and handfuls of unsalted nuts (healthy fats). He also avoided sugar and salt in his diet. It’s all about healthy steamed veggies and leafy greens.

So, did Jared Leto’s performance in Suicide Squad impress you? His shaved eyebrows, electric green hair, menacing laugh and rock solid body was a true transformation, making his performance a spectacular addition to the list of other actors who have taken on the notorious villain.

Clearly it took some dedication – a strict vegan diet and lots of weight training, cardio and abs work. But it all seems to come naturally to Leto – as a true artist, he takes on all his roles with passion.

If you want to try out a vegan diet like Jared Leto, consume foods like lemons, spinach, broccoli, grapefruit and dark chocolate. Opt for anti-oxidant rich foods and avoid excess meat, which raises the body’s acidity level and creates a breeding ground for illness to manifest.