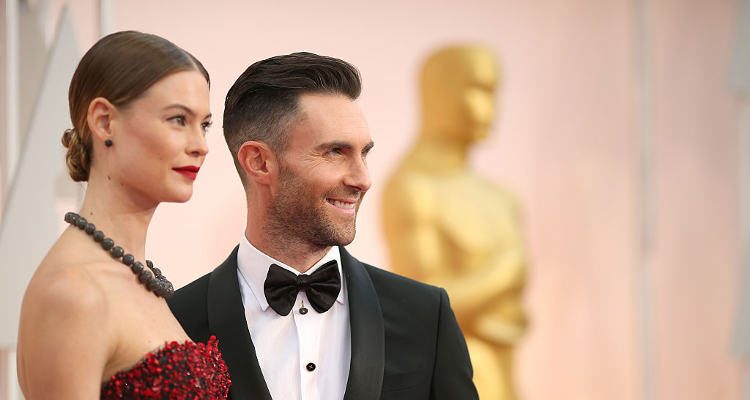 The super fit model is apparently jealous of singer, Miley Cyrus. Levine and Cyrus have been reportedly in a secret relationship. It was probably the reality-based TV singing competition show, The Voice (season 11), which brought the two coaches closer together. Levine serenaded a song to wish Cyrus a happy birthday through a video message, along with Alicia Keys and Blake Shelton. According to the rumors circulating, Prinsloo is not happy about this.

Meanwhile, there are claims of Levine being unhappy about Prinsloo’s poor parenting skills. It is claimed that the model likes to spend more time hanging out with her friends or updating her social media accounts than taking care of their daughter. Though these claims could possibly be true, new parents, Levine and Prinsloo, have yet to confirm the rumors about calling off their marriage.

Currently, the super fit model and new mom, who missed the 2016 Victoria’s Secret Fashion Show, is going through a fear of missing out moment. Her Instagram feeds confirms this. For example this post by the model which is captioned, “One happy day Good luck angels.”

She also posted a few days back, “ … I know the blood sweat and tears that goes into the making of this show and also being in it, this would have been my 10th year. I can’t believe it. Love you all, have fun in Paris and see you next year!!!!” It is reported that the stunning model is working out ahead of the 2017 VSFS and will be back in action for the annual spectacle.

How does the new mom and Angel stay super fit? What are the VS model’s fitness secrets? Keep reading to find out her workout regimen and diet.

Prinsloo may have missed the annual lingerie show in Paris but has indicated that she would be back in action in 2017. The Namibian-model usually steps up her workouts ahead of the show. The new mom will surely be working out to stay super fit ahead of 2017 VSFS. Celebrity trainer, Harley Pasternak, has trained Prinsloo and helped her stay super fit.

She told Hello! Fashion,“Usually I work out two times a week when it’s not the show, but two weeks before the show I did something active every day, even if it’s just yoga or swimming … I tried to do at least an hour of something every day.” She also includes cardio workout, weight training, Pilates, and yoga in her workout regimen. She likes to stay active, and enjoys walking and running to stay in shape.

The model also enjoys swimming, she feels that this is a great cardiovascular exercise and strengthens legs, arms, hips, and torso muscles. She likes to surf, paddle board, and is a water games lover. Prinsloo loves water games which helps her relieve her stress and keeps her body fit. She said, “The beach is definitely where I feel most at home. It’s my oxygen. I forget how much I need it sometimes when I’m away working. I am a mermaid after all.” This mermaid photo on her Instagram account shows this.

Prinsloo stays away from carbs, artificial sugar, and salt. She follows a strict diet regimen to stay in shape. The model believes in eating healthy, and likes to include a lot of protein and vegetables in her diet. She said, “I’ve never been an extremist,” and believes she is not a diet freak.

She snacks on almonds and is known to carry them around. She loves to have iced green tea from Starbucks, and also prefers regular Japanese tea. The model has even tried a juice cleanse but admits that it didn’t go out well with her as she had headaches and was starving. Instead, she prefers drinking juice and considers it good for detox.

A typical diet plan would include a low calorie protein source like scrambled eggs, avocados, and toast for breakfast. She also likes to drink a lot of water which results in low appetite and reduces her weight.

Prinsloo also learned to cook in the recent past, and this post confirms it. The photo was captioned, “It’s a working progress, Team work. Hehe. learning how to cook.”

It's a working progress, Team work. Hehe. ?? learning how to cook.

The model seems to have prepared zucchini sticks and Brussels sprouts and it looks quite scrumptious.

Rumors are rife that new parents, Behati Prinsloo and Adam Levine may be calling off their marriage. With a probable divorce on cards, new mom, Prinsloo seems to be focused on fitness and coming back to the VSFS. Fitness fans can try and adopt her healthy fitness regimen to stay in shape.