Home > Food Facts > Vegetables > Sweet Potatoes vs. Yams: How Are They Different? 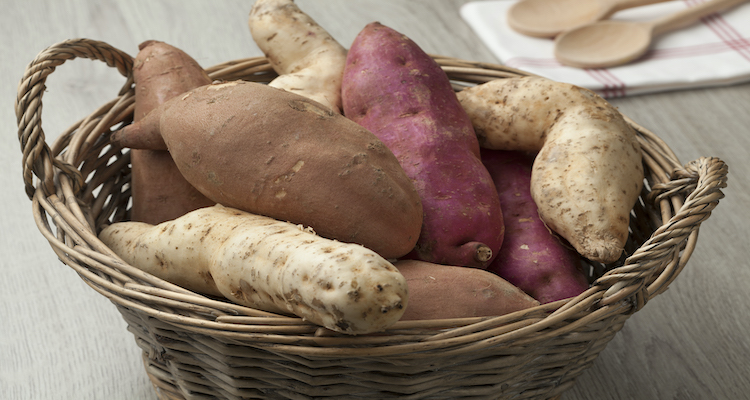 For some reason, the terms are used interchangeably, but the vegetables are quite different.

Sweet potatoes and yams differ in color, texture, and taste. In fact, trying to substitute one for the other can lead to a pretty shocking experience when you dig in.

These tuber vegetables aren’t even from the same plant family. It’s strange that such distant relatives, which differ in so many ways, are grouped together like they’re one in the same.

Let’s take a look at exactly how sweet potatoes and yams differ.

Let’s start with the obvious: yams and sweet potatoes look different inside and out.

Long and tapered, sweet potatoes have a smooth skin that varies in color. It can be brown, yellow, red, orange, purple, or beige.

Sweet potato flesh can vary in color as well. The most common varieties in North America are orange- or white-fleshed.

The two main types of sweet potato (Ipomoea batatas) are:

Yams, meanwhile, belong to the genus Dioscorea, and have a very different appearance than sweet potatoes.

The tubers can resemble gingerroot, varying in size, and can grow up to five feet in length. Yams also have a rough skin that almost looks like bark. It can be difficult to peel when raw.

The flesh of the cylinder-shaped vegetables can be white, yellow, purple, or pink.

In addition to their appearance, yams and sweet potatoes also differ greatly in taste and consistency. Yams are very starchy and dry, and are considerably less sweet than their distant relatives.

Moreover, yams have roots in Africa and Asia, while sweet potatoes are likely to have originated in Central or South America.

And the differences don’t stop there.

Here is a side-by-side comparison of yam and sweet potato nutrition. This is based on a 3.5-ounce (100 gram) serving of each.

Generally speaking, these two items are comparable sources of calories and nutrients, with slight discrepancies in certain areas. One glaring difference, however, is their vitamin A content. Sweet potatoes are one of the best nutritional sources of vitamin A you can get.

Vitamin A is a powerful antioxidant that can offer a number of benefits. One unique benefit, supplied by beta-carotene, is eye health. When you eat beta carotene, your body turns it into vitamin A, where it can help reduce oxidative stress on your eyes caused by the sun’s ultraviolet (UV) rays.

How to Cook Sweet Potatoes and Yams

Both of these vegetables can be cooked in a variety of ways. The most common preparation methods include boiling, steaming, roasting, or frying.

True yams, on the other hand, are typically found in specialty stores.

Yams can be bought in multiple forms, including whole or as powders or flour. Yam flour is generally sold at supermarkets specializing in African foods and products, and is used to make a dough served beside stews or casseroles. It can also be used to make instant mashed potatoes.

Yams can also be cooked much like sweet potatoes. Boiling and roasting are quite common. Some tasty and unique ways to enjoy yams include:

Can You Substitute Yams for Sweet Potatoes?

The answer really depends on your goals. If you’re just looking for a starchy, potato-like side dish and don’t really have a preference in taste or consistency, then yes.

Otherwise, yams and sweet potatoes won’t work as substitutes for each other. The sweet, rich flavor of a sweet potato won’t work in a dish suited to the relatively bland, dry yam.

In that case, a substitution would likely suffice. Although there is variation in sweet potatoes, one type can fill in for the other when needed.

If you’ve brought home a vegetable labeled “yam” that has a different shape and texture than your average sweet potato, you’re probably looking at a true yam. So, you’ll be in for quite the surprise when it comes time to eat.

Why Are Sweet Potatoes Called Yams?

There are two theories as to why sweet potatoes are often called “yams” in North America. One is rooted in the continent’s history of slavery. True yams are native to Africa, and it’s possible that the enslaved Africans called North American sweet potatoes “nyami”—a West African word meaning “food” or “to eat”—because they were similar to a familiar food from their home land.

Another reason why sweet potatoes are called yams may have to do with the introduction of brown, orange-fleshed sweet potato to the North American market. Paler-skinned sweet potatoes were already called “sweet potatoes,” so the yam moniker was attached to their orange counterparts. These days, it’s just a way for people to distinguish between two types of sweet potatoes.

True yams, those native to Africa and Asia, are scarcely found in large, chain supermarkets throughout North America.