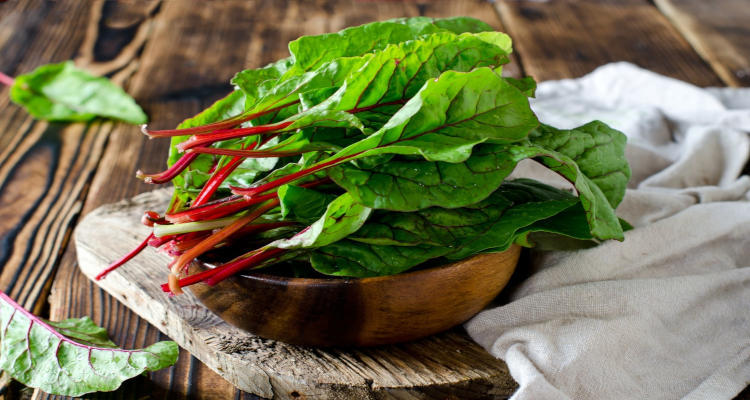 What Is Swiss Chard?

Swiss chard (Beta vulgaris) is leafy green vegetable and member of the Chenopodiaceae family. It belongs to the same family that brings us spinach, beets, and quinoa. The leaf blade of Swiss chard can be red or green, while the leaf stalks are often red, white, or yellow.

Although Swiss chard is the common name, you can also simply call it chard. Its moniker can be somewhat misleading. Many are surprised to find that the plant is not native to Switzerland; however, a Swiss botanist discovered it in 1753. Today, Swiss chard is referred to by other names around the world, including spinach beet, silverbeet, sea beet, and crab beet.
Swiss chard has been used in diets for thousands of years. It is native to regions in the Mediterranean, and the ancient Roman and Greek populations often grew and ate this leafy green while being aware of the Swiss chard health benefits. It’s been used to lower blood pressure, reduce pain, fight cancer, manage diabetes, maintain bone health, protect eye health, and benefit nerve and muscle function.

In this article, we will further explain the health benefits of Swiss chard. You will also learn more about Swiss chard nutrition facts, how to use it in your diet, and how to grow Swiss chard in your garden. Let’s get started…

Swiss chard was among the first crops grown in planetary space stations for astronauts. It was chosen due to its extremely high nutrition value.

From a mineral perspective, you will also find a large amount of manganese, magnesium, iron, potassium, copper, and calcium, as well as some phosphorus, selenium, and zinc.

The following is a comprehensive Swiss chard nutrition chart for one cup, or 175 grams, of chopped, cooked, and boiled Swiss chard.

Read on as we discuss some of the health benefits of Swiss chard in greater detail.

The antioxidant power of Swiss chard benefits heart health in numerous ways by reducing inflammation. Inflammation is what increases the risk of stroke, heart attacks, other forms of cardiovascular disease, and also worsens conditions like high cholesterol and high blood pressure.

A study published in the British Journal of Clinical Pharmacology in 2013 found that foods high in nitrates, like Swiss chard, have vascular benefits, including inhibiting platelet aggregation, reducing blood pressure, and improving or preserving endothelial dysfunction.

Another major benefit of Swiss chard is its reported ability to fight cancer. Swiss chard contains a number of anti-cancer nutrients such as quercetin, beta-carotene, vitexin (an apigenin flavonoid), various betalains, carotenoids, and chlorophyll.

Research published in the journal Phytochemical Analysis in 2011 shows that Swiss chard extract can inhibit the proliferation of human cancer cells. The antioxidants in Swiss chard are known to stop the growth of cancer cells such as prostate, colon, breast, endometrial, ovarian, and lung tumors.

Researchers have also begun to test Swiss chard seeds and leaves to see if they can be used as a chemo-protective treatment.

Swiss chard benefits extend to those with diabetes, pre-diabetes, and other types of insulin resistance or metabolic syndrome. Swiss chard contains an antioxidant called alpha-lipoic acid, which has been found to increase insulin sensitivity, reduce blood sugar, and prevent oxidative stress-induced changes in diabetics.

Research also suggests that alpha-lipoic given intravenously can reduce autonomic or peripheral neuropathy in those with diabetes.

Certain flavonoids in Swiss chard can help inhibit the activity of an enzyme called alpha-glucosidase, which breaks down carbohydrates into simple sugars. This in turn helps regulate blood sugar.

Swiss chard is a good source of vitamin K and calcium, which are two key nutrients that help with bone health. As a result, Swiss chard is helpful for the maintenance of skeletal structure, mineral density, and bone strength. A healthy intake may also help prevent the development of weak bones that lead to fractures.

Another key benefit of Swiss chard is its ability to protect eye health. The carotenoids zeaxanthin and lutein in Swiss chard may be protective in cases of eye disease since they absorb the damaging blue light that enters the eye before it can cause disturbances in the retina.

This can protect the cornea, retina, and defend against age-related eye disorders such as glaucoma, cataracts, macular degeneration, and night blindness.

The betalains in Swiss chard also protect the nervous system, and this includes specialized nerve signaling that is crucial for communications between your brain and eyes.

Swiss chard also contains a high amount of potassium, magnesium, calcium, and other minerals that benefit your nerve system and muscle health. Magnesium helps improve circulation and reduce pain and muscle cramps due to a magnesium deficiency.

The magnesium in Swiss chard can also prevent stress-related symptoms that can wreak havoc on the nervous system, which can lead to all sorts of problems, such as headaches, mood disturbances, sleep problems, diabetes, and high blood pressure.

How to Incorporate Swiss Chard into Your Diet

Swiss chard can be found at grocery stores, health food stores, and farmers markets. The best selections will have firm, deep green leaves. Smaller Swiss chard leaves are also tenderer with a milder flavor. The leafy vegetable will remain fresh in the refrigerator when put into a plastic bag and wrapped with a damp paper towel.

Swiss chard greens should not be washed right away since this leads them to wilt quickly. Swiss chard should also be used within four to five days of being purchased. That being said, you can cook the greens and freeze them to preserve nutrients, and later add them to stews, sauces, and soups.

Swiss chard can be consumed raw in salads or sandwiches; added to casseroles and soups; sautéed with garlic and extra-virgin olive oil; and steamed, boiled, or braised. The bitterness of the raw leaves will dissipate when cooked, and this leaves you with a soft and delicious flavor.

You can also use Swiss chard leaves in smoothies, fresh juice, scrambled eggs, or an omelet.

How to Grow Swiss Chard in Your Garden

Swiss chard is also very easy to grow in your garden, but you will want to plant it by early to mid-spring. Before you plant Swiss chard seeds, you will want to make sure there are no signs of frost. The soil must be at least 50 degrees Fahrenheit for proper germination of the seeds.

The growing area should also be loose and well drained, and partially shaded. Plant Swiss chard seeds directly into the ground about a quarter to three-quarters of an inch deep. You can plant eight to 10 seeds per foot of row planted.

Feel free to plant Swiss chard with vegetables such as spinach, parsnips, carrots, and turnips.

Swiss chard is a leafy green vegetable that can be steamed, boiled, sautéed, braised, and eaten raw in salads and sandwiches. It is loaded with antioxidants, which can help to lower blood pressure, protect heart health, fight cancer, manage diabetes, prevent osteoporosis, protect eye health, and benefit nerve and muscle function.

Yet there is a potential risk of Swiss chard to keep in mind. Swiss chard contains oxalates—a substance that, in high amounts, can cause certain health problems. People with a history of gallbladder or kidney problems may want to avoid Swiss chard, because oxalates may aggravate symptoms in some.

Still, this concern does not outweigh the benefits of Swiss chard. Swiss chard is a great addition to any healthy diet, which should also include other leafy greens like spinach and kale; cruciferous veggies like broccoli and cauliflower; fruits like apples, pears, and oranges; nuts and seeds; healthy fats like coconut oil and avocados; and proteins like organic, grass-fed meats and wild-caught fish.