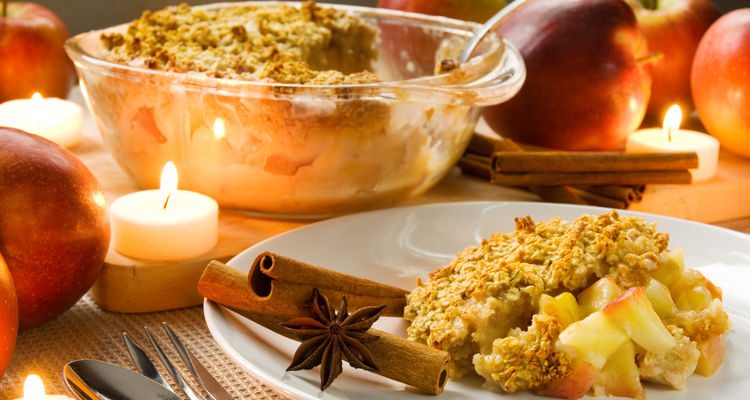 Thanksgiving Canada 2016 is fast approaching, and in honor of this special holiday, we’re sharing some mouth-watering Thanksgiving recipes by the renowned Canadian dessert chef, Anna Olson.

Crust – Grease an 8-inch square pan and line with parchment paper. Preheat the oven to 350 °F. Mix graham crumbs with the cocoa powder and salt, and add the coconut and walnut pieces. Pour in the melted butter and the egg and blend well. Put the mixture in the pan and bake for 12 minutes.

Filling – Beat the butter by hand with one cup of the icing sugar, the custard powder and a pinch of salt. Pour in the milk and vanilla and beat in. Then beat in the remaining one cup of icing sugar.

Topping – Melt the chocolate and butter in a double boiler, stirring gently. Pour the mixture on filling after it cools. Chill the pan for two hours, and then cut it into slices.

Preheat the oven to 350 °F. Place the apples in a large baking dish (1.5L by volume) and coat them with maple syrup and vanilla. In a saucepot, melt the butter until it turns brown. In a bowl, mix the oats, flour, brown sugar, cinnamon and salt. Add melted butter and blend well. Cover the apples with this layer and bake for 45 minutes. Cool for 15 minutes and serve.

For Cookies: Preheat the oven to 350 °F. Line two baking trays with parchment paper. Beat the butter and both sugars until smooth and then add the egg. Mix in the pumpkin puree and blend well. Sift the flour, baking powder, baking soda, salt, and spices in another bowl and then add the mixture to the pumpkin batter. Fold it well. Scoop the cookies onto to the baking trays and bake for 17-20 minutes. Cool before adding the frosting.

For Frosting: Beat the butter and cream cheese together until smooth. Add one cup of the icing sugar and mix well. Pour in the vanilla and another cup of icing sugar and beat until the mixture becomes spreadable. Pipe or spread the frosting onto each cookie. Sprinkle some cinnamon on top.

For Crust: Preheat the oven to 325 °F. Grease a 9-inch pan and place it on a baking tray. Combine the crushed cantucci with the melted butter and press this into the bottom and up the sides of the pan, coming almost all the way to the top. Bake for 12 minutes and cool while preparing the filling.

For Filling: By hand, whisk the ricotta until smooth. Whisk in the sugar, eggs, yolks, Marsala, vanilla, lemon and orange zests, and nutmeg. Then whisk in the melted butter. Add the grated chocolate and pour the filling into the crust. Bake the cheesecake for an hour, or until it slightly jiggles in the center. Cool it for 90 minutes, and then chill for three hours before serving.