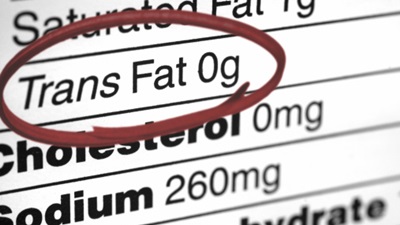 The U.S. Food and Drug Administration (FDA) recently proposed a total ban upon trans fat in the food supply. The ban would require food manufacturers to gradually phase out the use of trans fats in commercially-produced foods.

According to the FDA, eliminating trans fats from our diets could potentially prevent 20,000 heart attacks and 7,000 deaths annually. That’s because trans fat increases the “bad” LDL cholesterol, produces free radicals, increases inflammation, and interferes with the production of necessary fat molecules your body needs

Trans fats are made after exposing vegetable oils to high amounts of heat and hydrogen under pressure. The hydrogenation process changes the fat molecules from a cis to a trans molecular configuration. These trans fats are artificially made and can cause a great deal of damage inside our bodies.

So why create them? Trans fats are used to increase the shelf life of commercially-made foods and can be used to make foods at higher temperatures since the melting points of trans fats are much higher.

Here in Canada, there are similar warnings and concerned regarding the use of trans fats in the commercial food industry. “According to records we obtained, [Health Canada’s] own scientists told them they could prevent 1,000 deaths a year and save between a quarter and almost half a billion dollars a year by making regulations to get trans fat out of the food supply,” said Bill Jeffery, national co-ordinator for the Centre for Science in the Public Interest (CSPI).

Mr. Jeffery has also raised his concern regarding the export of American foods to the Canadian market. “It may be that U.S. food manufacturers [who] export to Canada will just export a safer product with less trans fat in it, or maybe they’ll see Canada as a market to dump their foods and maybe we’ll end up with more trans fat coming across the border.”

According to documents released from Health Canada, their intention was to limit the content of trans fats in margarines and spreadable vegetable oils to two percent of the total fat content and to a maximum of five percent in all other foods. However, this proposal was never announced or instituted.

Despite that, Canada has come a long way, considering it once has the highest consumption levels of trans fat in the world. Now, the majority of Canadian products are trans fat free, and according to Health Canada’s monitoring program 80% of pre-packaged food companies have voluntarily reduced the amount of trans fat in their food.

In my opinion, the food lobby has placed pressure upon Health Canada to discourage laws limiting the use of trans fat in our food supply. I applaud the efforts in the U.S. by regulatory officials to completely phase out the use of these toxic fats in their food supply.

It’s a shame that even after Health Canada’s own scientists have developed recommendations for trans fat use, important health policy is being stymied by the food lobby!