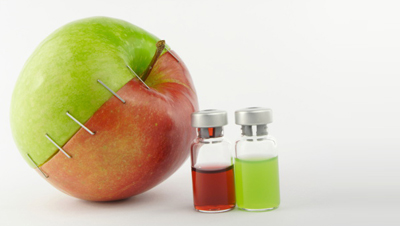 We’re constantly hearing about the dangers of genetically modified organisms (GMOs) or foods and while studies have pointed out some of the potential health risks of these foods, can they also come with some benefits?

Genetically modified foods can be either foods that were selectively bred or genetically altered to improve their characteristics. They’ve become a hot controversial topic lately, with many people claiming that GMO foods can cause cancer, fertility problems, or digestion issues, to name a few.

While it’s important to be aware of any health risks, GMO foods may come with some health benefits after all, such as improving the quality and safety of foods. For instance, both a variety of lentil that is popular in India and cassava, a root that is highly consumed in Nigeria, are known to contain high levels of harmful substances which could lead to toxicity or disease. By creating genetically engineered foods, scientists could produce safer varieties of these foods by reducing the levels of these harmful substances.

What the People Think

In a European poll, 40% of the respondents felt their health could be compromised by genetically modified foods. However, most people were more concerned about food contamination by pesticides, viruses such as avian flu, or bacterial contamination. The general population had more faith in information delivered by scientists, physicians and public authorities than in the producers and manufacturers of food products.

Most genetically-modified foods that are grown in 25 countries worldwide benefit the producers more than the consumers. These genetically modified foods include herbicide-tolerant and insect-resistant crops.

Some of the health risks can include toxic effects from specific gene interactions, cancer risks due to increased pesticide use on the genetically modified crops, allergens (which may be caused by new proteins or interactions with the usual proteins), and antibiotic resistance.

But these two new interesting developments show some GMOs might be beneficial for your health.

Golden rice, a second generation genetically-modified food, has the potential to improve nutrient deficiencies and improve the health populations in developing countries. Golden rice is a genetically modified food that incorporates vitamin A, a highly deficient and essential vitamin in poor communities in the developing world.

Vitamin A is an essential nutrient that plays a vital role in ensuring a healthy immune system and vision. For people living in a developing country, access to clean water and proper nutrition is a very big problem and therefore their risk of blindness and infectious diseases is high.

Further, high levels of poverty and limited variety in their diet are both contributing factors to vitamin A deficiency. While food supplementation is an effective means to improve their nutritional status, it is difficult to ensure that the supplements would reach the target population in rural areas. Since rice is a staple food in their diet, growing golden rice seems to be a more plausible solution. Golden Rice has great promise in improving the health of entire nations.

Recently, a team of researchers from UCLA carried out a study on mice that determined a type of fat called unsaturated lysophosphatidic acid (LPA) could be a culprit in increasing cholesterol levels and increasing risk of atherosclerosis and heart disease in the Western world.

LPAs were thought to be negligible since they are found in such small amounts in the small intestine but the UCLA scientists are determined to find a way to target these fats in the intestine. By doing so, they could prevent these fats from reaching the liver, which in turn would prevent any changes in blood cholesterol levels and prevent inflammation.

Genetically engineering healthy foods such as tomatoes can help reduce the LPA levels found in the intestine. The scientists genetically engineered the tomatoes to produce a peptide that prevented an increase in LPA levels, prevented an increase in LDL (“bad” cholesterol) levels, prevented a decrease in HDL (“good” cholesterol) levels, and prevented inflammation, overall. For the group of mice consuming the tomatoes without the peptides, no effects were seen.

To Eat or Not to Eat?

The research is just beginning in terms of the dangers and benefits of GMO foods. While it’s not conclusive yet, it could be promising—stay tuned.