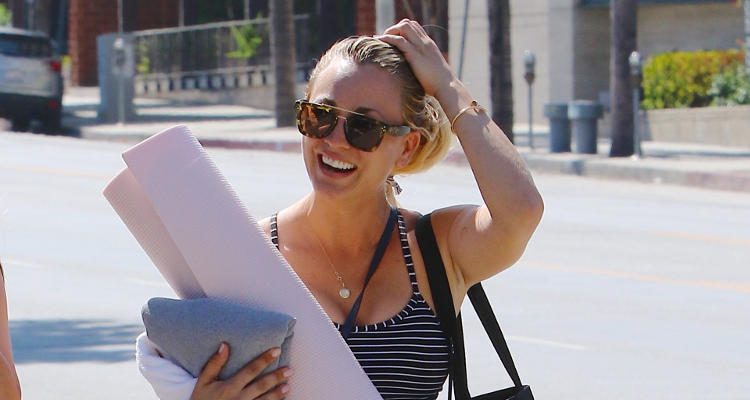 Kaley Cuoco is best known as Penny in the long-running CBS comedy series, The Big Bang Theory. The 30-year-old was spotted on Monday heading to the CorePower Yoga studio in Studio City, CA, for her power yoga class. Cuoco made her way to yoga in a “Namaste” T-shirt, a pair of pink shorts, and black sandals.

Cuoco is known for being super active–in addition to yoga, she also loves horseback riding.  It’s a physically and mentally challenging workout, and after an hour she is exhausted. She reportedly rides for about 60 minutes, four times each week. Cool fact: Cuoco actually met her new man at a horse show– equestrian Karl Cook .

What are Kaley Cuoco’s Favorite Exercises and Foods?

Kaley Cuoco also works out at the gym. That being said, Cuoco can get bored of the same routine and has now added a variety of different exercises for fun, including spinning classes three times a week. Spinning class is a great stress reliever that helps Cuoco build her core, butt, calf, and thigh muscles.

Cuoco works out with personal trainer George C. King. King and Cuoco focus on a full-body workout that includes arms, abs, and butt exercises. The workout contains three to six different exercises, such as 10 reps of close-grip push-ups, 20 seconds of mountain climbers, 15 reps of squat jumps, and 30 seconds of planks.

Cuoco also loves a good abs exercise. One of her abs exercise circuits includes a BOSU ball sit-up with squat jumps, plank jumping jacks, and alternating prone dumbbell triceps kickbacks. Each of the exercises will burn fat, work the abs, and improve Cuoco’s overall fitness levels. Here are other key workouts for Cuoco:

Like most healthy celebrities, Kaley Cuoco combines her workout sessions with a nutritious diet. For instance, Cuoco will eat granola, skimmed milk, and fruit for breakfast, a sandwich after spinning class, and a homemade dinner.

Cuoco also avoids white bread, white potatoes, and white rice, and will only eat healthier carbs like brown rice or quinoa for lunch or oatmeal for breakfast. Most of the time, she combines vegetables with a lean source of protein.

On a fun note: Cuoco was also recently named the second highest paid TV actress behind Sofia Vergara, 44, who stars in Modern Family.