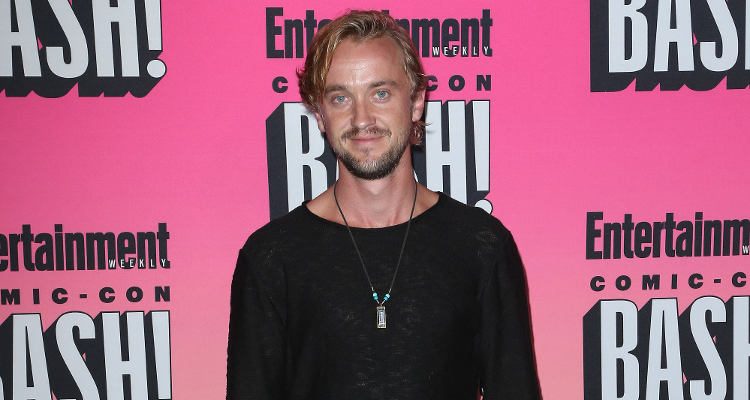 Harry Potter alum Tom Felton is set to join the cast of The Flash in season 3 as a series regular. The 29-year-old Felton will be added to The Flash cast as CSI tech Julian Albert.

Recent photos from the set of The Flash show off Tom Felton’s high fitness levels. Felton is known to be in good shape; he has a solid diet and workout regimen.

?: @grantgust – Season 3, Barry doesn't have his own lab anymore… ? ONE WEEK until Season 3 of The Flash! #tomfelton #TheFlash

On the set of The Flash #tomfelton #TheFlash

Felton rose to prominence for his role as Draco Malfoy in eight film adaptions of the best-selling Harry Potter fantasy novels. His roles in Harry Potter and the Half-Blood Prince and Harry Potter and the Deathly Hallows – Part 1 won Felton two consecutive MTV Movie Awards for Best Villain in 2010 and 2011. Felton’s other films include 2016’s Risen, 2012’s The Apparition, and 2011’s Rise of the Planet of the Apes.

The Flash season 3 premieres Tuesday, Oct. 4; however, Felton will make his debut in the show in the second episode of the season titled “Paradox,” which airs Oct. 11. The Flash cast is known for making Harry Potter references, especially the Cisco Ramon character, and Felton wants the references to continue.

Felton’s Julian Albert character is a CSI forensics wizard, and is a rival of sorts for Barry Allen, aka The Flash. Barry Allen has worked in the lab by himself, and now must share it with Julian Albert, who really doesn’t like Barry. Julian is also suspicious that Barry is more than meets the eye.

Felton has a history of losing weight to play characters on the big screen. For instance, Felton had to get into a calorie-controlled diet to play WWI pilot Tony Pastula in the 2014 adventure film Against the Sun. The movie was about a pilot, radioman, and bombardier that find themselves on a lifeboat without water or food, after being forced to ditch their plane during a scouting mission.

Felton admittedly found it tough to stick to a restricted diet of 500 calories a day. He would eat every two hours, and would eat seven almonds or half a broccoli stick. The restricted diet was very difficult for Tom Felton to follow, since the Harry Potter actor is a very big eater.

Felton also hadn’t realized that drinks had a lot of calories until he was caught drinking a few beers. His nutritionist noticed some empty beer cans, and explained they contained 150 calories each. Felton also discovered that coffee with milk had 380 calories, which would add up to almost a full day’s worth of calories.

Felton, who often plays the bad boy character, has a 39-inch chest and 13.5 inch biceps. Tom Felton does workout, and once jokingly tweeted about his gym workout of a 10-minute swim and 20-minute sauna, steam, and Jacuzzi.

The five-foot nine-inch 145.5 pound actor also tweeted in 2012 about his “rigorous attempt to get into some sort of shape.” Tom Felton was required to get into shape for the 2013 dramatic sports movie From the Rough. The film was about the first woman and African American woman to coach a men’s college golf team.