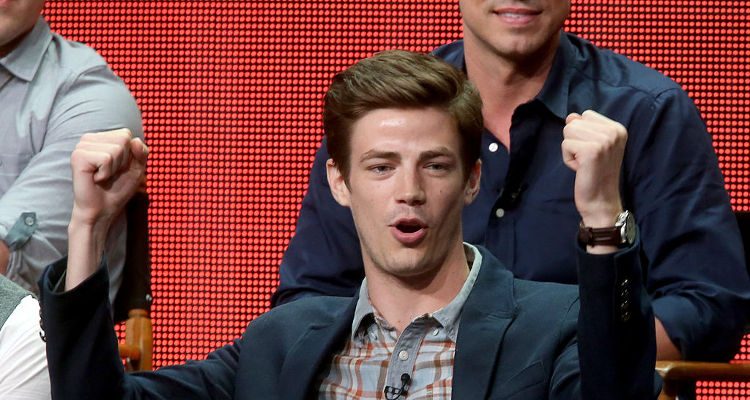 The Flash season 3 premiere was this week, which picked up where the second seasons flashpoint cliffhanger left off. Barry Allen—played by Grant Gustin—is living his dream life as a normal person, while Kid Flash is running around saving the city.

On the other hand, Reverse-Flash begins to taunt Barry and those he cares about in this alternate universe. Barry is met with the loss of his memories and a big decision of whether or not he wants to remain in this alternate world and lose his powers, or take on being The Flash once again.

Gustin has revived his role as The Flash for the third season, and although the show is widely popular, it doesn’t make Gustin immune to nasty bodyshamers. You think playing a superhero people would make people envious, but rather he is constantly faced with criticism while wearing the infamous red jumpsuit.

That red jumpsuit is quite fitted, and Gustin isn’t what you would call “jacked” enough to really fill it out. It is his lanky stature that has brought him ridicule. Even though Gustin is healthy and happy, it seems that some may not be impressed with his lack of bulging muscles.

So how does Gustin take such backlash? Well, like many celebrities, he took to his twitter to address the negativity. In his post, Gustin wrote, “Hey. Just a PSA. People telling me to “put on 10 lbs.” F**k off. That’s the same as telling someone to lose 10. Lemme do me. You do you.” He followed that up with, “I don’t need anyone to defend me either, I’m ok, everyone. Just putting that out there. ALSO..I do try.” Those are some serious fighting words, but as with anything under pressure, eventually it cracks.

One thing bodyshamers don’t take into consideration is the hard work that actors and actresses put into fulfilling their roles, and Gustin is no different. Sure, they may not see bulging muscles, but that doesn’t mean that Gustin is just sitting on his couch at the end of the day. In fact, Gustin works out quite hard to build strength and agility—he is The Flash after all, meaning he must be fast, not muscular and bulky.

Gustin focuses on running, and even before he filmed the pilot for The Flash he trained for three to four months to put on some weight. Gustin acknowledges that he has a slim build, and so he completes the best workouts for his body type which include plenty of running and push-ups on set.

Clearly Grant Gustin doesn’t need others approval when it comes to his body, and he’s more than happy doing what he loves while looking the way he does.