Home > Food News > The Food That’s Got You Hooked 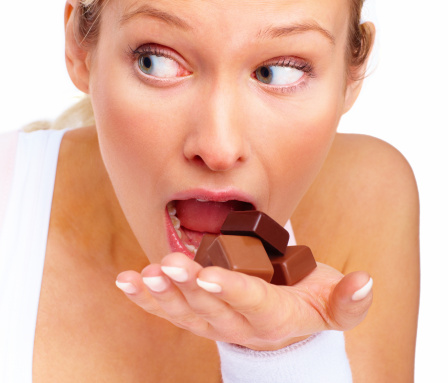 A recent study published in the American Journal of Clinical Nutrition took a look at food addiction. The study group was composed of 12 obese male participants who consumed two meals.

The meals were controlled for nutrient content, total calories, and taste. However, the only difference was the type of carbohydrate given as a test meal.

There was a high glycemic meal and a low glycemic meal provided to each participant, and they didn’t know which one they were given.

The researchers exposed the study participants to brain MRI examinations four hours after they consumed each of the two test meals.

They assessed the blood flow to the brain in a resting state with the intention of measuring the blood flow to key brain centers responsible for craving, eating behavior, and reward. The researchers also measured the blood sugar of each participant at two hour intervals during the trial. What they found was quite remarkable!

Food Addiction Starts in the Brain

In addition, four hours after consuming the high glycemic meal, these participants reported higher degrees of hunger compared to the subjects who had consumed the lower glycemic meal.

The most important finding revealed in this study was the fact that certain areas of the brain which are responsible for craving and reward were shown to be much more affected in subjects who consumed the high glycemic meal contrasted to subjects who ate the low glycemic meal.

The results of this study clearly indicate that the meal you eat can affect your eating behavior for subsequent meals.

According to the chief investigator, Dr. David Ludwig, “we think we have shown for the first time that refined carbohydrates can provoke, independent of calories and tastiness, symptoms related to addiction in susceptible people—those who are overweight or obese.”

The results of this study indicate that the consumption of refined carbohydrates like sugar, white bread and potatoes, “alter brain activity in ways that make us crave them even more,” said Dr. Ludwig.

The Foods That Make You Addicted

In my opinion, food addiction is propagated from the consumption of food items which are high on the glycemic scale. The glycemic scale measures the rate in which blood sugar is raised from various foods compared to table sugar.

Foods that are high on the glycemic scale are typically made from white flour or high in sugar and cause dramatic increases in blood sugar shortly after consumption followed by an abrupt downward trend. This pattern increases hunger and the need to eat to increase dwindling blood sugar levels.

In addition, consuming foods high in sugar also stimulate areas of the brain associated with craving, reward, and eating gratification.

Have you ever wondered why certain foods seem to be addictive? Do you get comfort from eating certain foods like pasta, pizza, macaroni, ice cream, chocolate, or bread? Do certain meals trigger increased subsequent eating frequency and volume?

If you answered yes to these questions, there is scientific proof available to indicate that certain foods are addictive and should be avoided. Food manufacturers understand this when they design and market breakfast cereals, baked goods, deserts, drinks and snack foods.

After being repeatedly exposed to these products, you  become addicted to them. The best way to avoid this problem is to avoid these addictive foods altogether, which is easier said than done. But if you really set your mind to it, you will feel much better and you’ll be healthier.