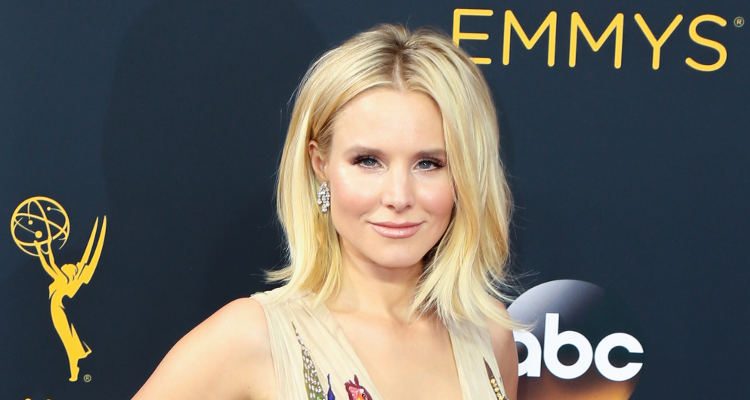 Kristen Bell is one of those rare Hollywood actresses who is really and truly down to earth and gives us her real self. She even openly talks about the struggles with depression that she has dealt with since she was a teenager.

Bell was at this past Sunday’s Emmys 2016. She has a new show airing this fall on NBC, The Good Place, which marks her first return to broadcast television since her breakout role on Veronica Mars.

Bell shared a picture of herself eating a slice of pizza on Instagram Sunday before the Emmys. And true to her funny nature, she left the dab of pizza sauce on her chin for all to see.

The shading on my chin tonight was courtesy of @pizzasauce. #pizzasauce #emmys

Bell might look like she leads a glamorous life, but she’s refreshingly simple; so that means no fancy gyms or classes for this mother of two.

In fact, she quite hates working out. Not just one type of exercise or class, all of it. But she has a fitness routine anyway because living a healthy life is important to her, and she admits that working out makes her feel good at the end of the day.

Research has shown that exercise is fantastic for those who suffer from depression because all kinds of feel-good hormones get pumped into the body when we work out.

Some of Kristen Bell’s Favorite Exercises

Having healthy habits is important for everyone, but especially for those who struggle with depression. Diet and exercise are critical components of feeling good across the board – regardless of what struggles you have. Kristen Bell knows this, and she has managed to find a handful of activities she enjoys doing.

Here are her top picks.

#1. Pilates. She loves how it makes her body feel better and the better posture and muscle tone that happen as a result of continuous practice. Bell also likes the way Pilates isolates individual muscle groups.

#2. Jogging. Even though she really, truly hates doing it, Bell says it makes her feel the best. How does she get through it? By putting on a podcast.

#3. YouTube videos. As a mom of two, getting out of the house every day to work out can be tricky, so Bell’s solution is to scour YouTube for workout videos and follow along in the comfort of her own home.

#4. DVD rotation with friends. Her circle of friends has come up with a great idea – share workout DVDs. If she’s home with the kids, she will pop in a DVD and do a yoga workout and the kids will follow along.

Kristen Bell isn’t exactly a morning person, so she tries to get in her workouts in the afternoon or when her husband Dax Sheppard is home in the evening.

And if she doesn’t get a workout in, she definitely doesn’t beat herself up about it. To stay fueled up throughout the day, Bell says she eats a lot of bars. So much so that she even started her own granola bar company called This Bar Saves Lives.