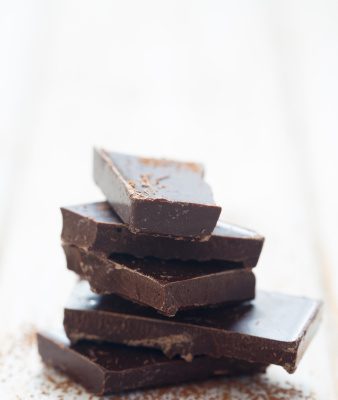 You’re about to devour that warm, silky-smooth bar of chocolate when you stop and feel a hint of regret. After all, you’ve been working so hard to eat the “right” foods lately and you’re not sure if you’ll be opening a Pandora’s box of chocolate cravings when you take the first bite. Well, what do you have to feel guilty about? Here’s everything you need to know about dark chocolate.

First of All: What Makes Dark Chocolate Unique?

Dark chocolate is made from the cocoa bean and sugar and, unlike its famous counterpart milk chocolate, it doesn’t contain milk. But there are lots of varieties of dark chocolate out there: sweet, bittersweet, and pure bitter. Why? Different types of dark chocolate will contain different percentages of cocoa, and the healthiest ones are the ones that have more cocoa and less sugar and fat. Nutritionists recommend finding a dark chocolate that is at least 70% cocoa.

Why Dark Chocolate Is Healthy

And there’s more: researchers in Denmark randomly assigned 44 adults, ages 56 and older, to eat either 6.3 g of dark chocolate per day (containing 30 mg of polyphenols) or a white chocolate without polyphenols for 18 weeks. The results, published in the Journal of the American Medical Association, found that the group eating the dark chocolate actually had lower blood pressure than the control group, with the prevalence of hypertension declining from 86% to 68%. That’s quite a difference!

Another study recruited 1,216 women for a five-year period, during which time they ate chocolate less than once a week, had one to six servings per week, or had seven or more servings per week. The women who consumed chocolate frequently had a much lower risk of hospitalization or death for ischemic heart disease and heart failure. They also had a lower prevalence of carotid atherosclerotic plaques. That said, they found similar results for people eating chocolate weekly or daily, so it looks like you only need to eat a few servings a week to reap the benefits.

There’s Always a But…

But, of course, if dark chocolate was as healthy as we thought, then we would be gobbling it up night and day. Some people say chocolate can be a stimulant, like coffee, since cocoa contains caffeine. The “healthiest” kind of chocolate has 70% cocoa and that can taste pretty bitter—and the reason you’re eating chocolate is for its sweet taste, anyways. It’s also high in fat and, on average, about 50% of the energy in chocolate is fat.

To Eat or Not to Eat?

There’s enough evidence to show that eating dark chocolate in moderate amounts can have some beneficial health effects—and it might even prevent you from eating other, unhealthier junk food. So indulge yourself every now and then.