Home > Food News > Tom Hiddleston Jogs with Bodyguard: Is the Workout for Taylor Swift or Thor? 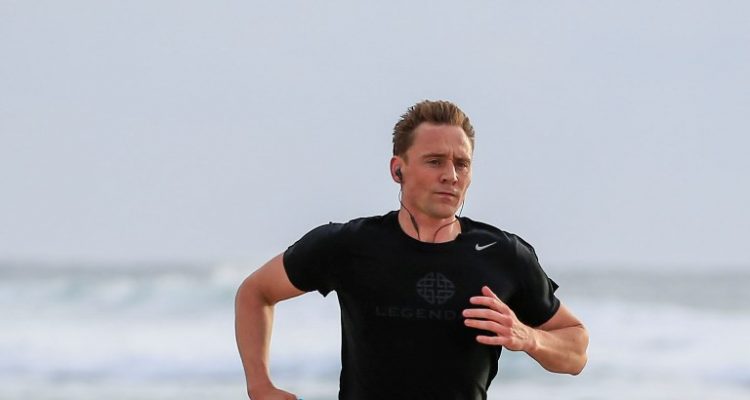 On July 13, Tom Hiddleston was photographed going for a run in the Gold Coast in Australia, where he and girlfriend Taylor Swift have been spending some time as he’s filming Thor: Ragnarok. Was Hiddleston running for Swift or for his film role? Probably both, as Hiddleston is in great shape and likely wants to maintain it, but it’s also likely that he would want to keep to his workout regimen even just for himself, regardless of movies or women.

The man known for playing Loki in the Thor movies and in The Avengers (and now also known as Taylor Swift’s boyfriend), Hiddleston has always had an amazing physique, but it seems as though in this past year, his form has sharpened up into a tighter mass of muscles.

There is speculation in Hollywood that he might be lining up to play the role of famous superspy James Bond, but nevertheless his role as Loki requires that he stays in top form, not only to look good but to be able to perform in the scenes, which are often action-packed and require physical strength and endurance.

Plus, it wouldn’t be surprising to find out that, like Adam DeVine when talking about Zac Efron, he didn’t want to look too small standing next to Thor (that is, Chris Hemsworth).

Hiddleston’s diet is tight and clean, and it would need to be to help him stay in as good a shape as he does. Sugary and alcoholic drinks are off-limits, as is junk food and processed food.

He sticks to a high-protein diet, which includes broiled chicken, turkey, vegetables, and brown rice. Water is his go-to drink and he consumes a lot of it throughout the day. Whatever he’s doing, Tom Hiddleston’s girlfriend Taylor Swift is sure to approve, as are fans when they see him reprise his role in Thor: Ragnarok.