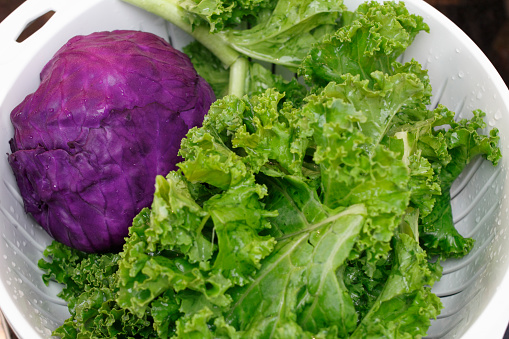 Cancer Fighting Foods and their connection to urine tests — researchers found some pretty interesting results in a new study.

Urine tests can help researchers figure out what the best cancer fighting foods/food compounds are, according to new research from Georgetown Lombardi Comprehensive Cancer Center.

Researchers created a novel method where food compounds found in human urine can be assessed—a process that could eventually replace food logs used in studies that analyze the effects of one’s diet on cancer. The urine tests can also help researchers more accurately classify the top cancer fighting foods.

For their study, researchers looked at cruciferous vegetables, which in previous studies were shown to have a protective benefit against lung cancer. Cruciferous vegetables are part of the Brassica family of vegetables, and can include cauliflower, kale, Brussels sprouts, bok choy, Swiss chard, cabbage, watercress and, collard greens.

Cruciferous vegetables contain high amounts of chemicals (sulphoraphane and indole-3-carbinol) and compounds (i.e. isothiocyanates) that when consumed in high amounts, can help prevent various cancers, such as prostate, breast, lung and colorectal.

Isothiocyanates  have various potencies and anticancer properties, so they aren’t equal in protecting against cancer.

According to Marcin Dyba, a research associate with the study, a simple ten-minute urine test the team developed can test for isothiocyanates and other compounds linked to cruciferous vegetables. This in turn could help researchers calculate how much of these molecules are being consumed.

The urine test will also show scientists what molecules in these nutritious veggies have the strongest link to cancer prevention. Findings will likely be tested in animal studies—and any compounds that are found to be protective against cancer could result in a dietary supplement or help strengthen dietary recommendations. The test was developed specifically because there has previously been no way to find out which specific isothiocyanates work best.

Study findings will be presented on April 18, 2016, in New Orleans, at the annual meeting of the American Association for Cancer Research.