Home > Diet & Nutrition > Weight Loss Essentials > Can You Drink Your Weight Away? 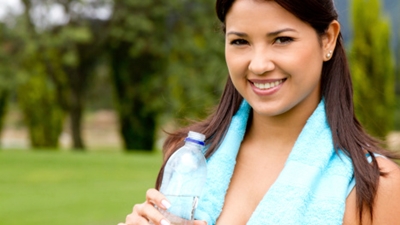 Can you drink yourself skinny? It depends who you ask. Most dieticians, weight loss specialists, and nutritionists will tell you that if you want to lose weight, the first place to start is your tap. And I partly agree. Staying hydrated allows for optimal body function and cell metabolism, lubrication for your muscles and joints to move and contract without cramping, while allowing you to expend energy. The body of the average human contains up to 60% water, while obese people hold far less. In my opinion, something that makes up 60% of your body is clearly important.

Water also isn’t filled with useless calories that can make you fat like a number of other popular beverages. Most sodas, juices, energy drinks, specialty coffees, and alcohol come packed with calories many people don’t even know are there. As we’ve seen with the current war on soda, the sugar content in so many of the beverages we enjoy are major contributors to the obesity epidemic. When it comes to losing weight, water is the straight goods. It’s as clear as it looks in a glass. When compared to most beverages, it’s the healthier alternative and drinking it can save you all kinds of unwanted calories.

A nutrition expert from the University of Alabama at Birmingham is refuting the claims that water is a magic formula for weight loss. She says there is very little evidence to support that drinking water actually leads to weight loss and that any impacts on weight are negligible, at best. If anything, it may contribute to a few calories lost per day.

Now, obviously drinking water every day isn’t going to be a major force when it comes to weight loss. You’re not going to drop 30 pounds this year by increasing your water intake. However, by drinking it as an alternative to alcohol, soda, most juices, and coffee loaded with fattening creams and sugar, it will definitely save you the extra calories and limit weight gain.

For example, a colleague of mine was addicted to diet soda. She would drink multiple cans of diet soda per day, Diet Coke to be exact, but was in phenomenal shape. She was athletic and had the type of body you might see in a fitness magazine. Now sure, Diet Coke has zero calories and won’t contribute to weight gain—as the University of Alabama doctor notes—but the other chemicals in diet soda can have negative health impacts. There is data supporting the notion that artificial sweeteners can have negative metabolic effects, while the carbonation of these beverages can lead to bloating or discomfort. At the end of the day, drinking diet soda might not promote weight gain, but it is packed full of chemicals.

Now, there are some myths about water’s benefits for weight loss. For example, is there an ideal amount or temperature to get the most benefits? No. It doesn’t matter what temperature the water is for weight loss. Obviously, a cold drink on a hot day can cool you down and regulate your body temperature, but drinking water at room temperature or at a high temperature doesn’t particularly make a difference in thermogenesis or your metabolic rate. And as far as drinking eight 8-ounce glasses per day, you don’t have to keep count. Instead, drink water when you’re thirsty and be smart about it: if you’re using more energy or sweating, drink more water to replenish what’s been lost.

If you want to lose weight, water isn’t going to be the determining factor of how many pounds you lose. It’s a component of weight loss that supplements the two components that truly make a difference: diet and exercise. If you don’t stay hydrated you won’t be able to exercise without cramping and it will be hard to assist your cells in metabolizing the nutrients you consume.

Because water doesn’t contain calories, it won’t contribute to weight gain like so many other beverages do. By picking water as your drink in place of soda, fruit juice, alcohol or specialty coffee, you’ll likely see some pounds drop from the scale.