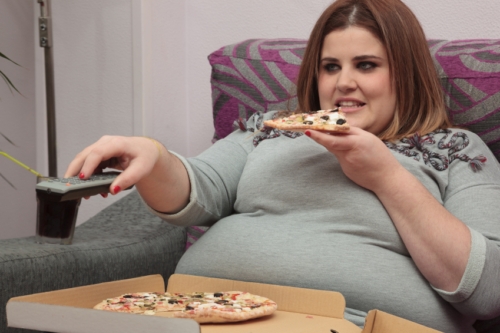 The idea that weight gain can be spurred by poor emotional regulation is not new. It’s why emotional coping techniques are becoming part of weight management approaches.

What is new is a set of findings showing that the brains of overweight individuals may be physically less capable of reappraising emotions and emotional regulation in general. If true, this could suggest that some people may be more prone to poor coping techniques due to their brain function and that poor emotional regulation could be tied to weight gain.

However, reaching this assumption requires clearing a gap between what this study actually shows and what conclusions can be drawn.

For the record, the neutral pictures that participants were shown were of things like filing cabinets, while the negative ones included images of tarantulas crawling up someone’s shoulder or a child with part of their face sliced off. However, the intensity of the emotional experience was self-rated by the participants. While there are few objective ways to assess emotional impact in an individual, it still bears mentioning that self-reporting is subject to inconsistency or flaw.

What These Findings Mean

Chronic stress is known to be an influencing factor for weight gain and this study is attempting to provide a possible biological mechanism behind the relationship. In other words, those who are unable to properly regulate negative emotions may be more vulnerable to developing chronic stress and the subsequent impacts that has on becoming overweight like excessive use of comfort food or other unhealthy habits. To some, this may seem like an obvious connection that does not require a study to prove. However, in science, it is always better to be able to support intuitive claims with data.

Having said that, there is one major caveat to keep in mind. This study only shows that the brains of some overweight individuals are less active when trying to use a specific type of coping technique (emotional reappraisal). It does not and cannot show that this decreased activity translates into the techniques having less effectiveness.

The small sample size of less than 20 in each group, combined with the self-reporting of emotional impacts, makes determining how well the techniques worked extremely unreliable within this study. The study is also only looking at overweight individuals’ after-the-fact, meaning that it could be weight gain that results in the decreased brain activity and not the other way around.

These findings present a plausible mechanism, data support, and link between poor emotional regulation, chronic stress, and weight gain. However, actually making that link is beyond the abilities of the study itself. There is more support for the idea that these brain activity traits might make further weight gain more likely or weight loss more difficult, but it is currently a leap to assume it means they contributed to becoming overweight in the first place.