Home > Food Facts > What Does Rhubarb Taste Like? These Recipes Make It Taste Better 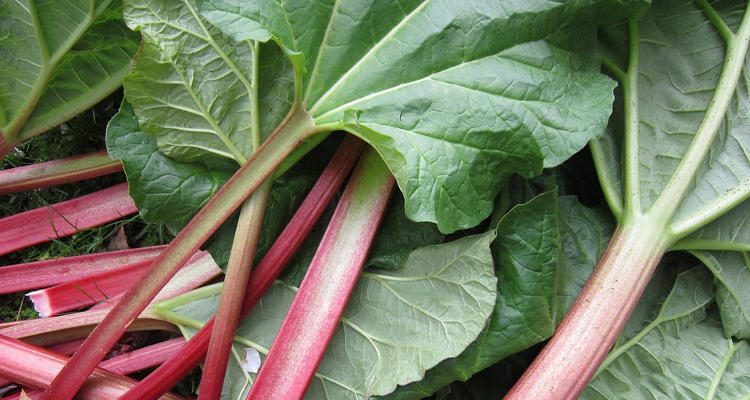 Rhubarb is an ancient plant and is native to China. Even though it is considered a vegetable, its uses are more like a fruit. It grows well in warm and temperate climates. Rhubarb has red, fleshy celery-like stalks. So, what does rhubarb taste like? Well, rhubarb has a strong, tart flavor.

Rhubarb is an ingredient added to savory dishes, or it can be pickled. The color of the rhubarb stalk varies from crimson red and light pink to light green. To enjoy rhubarb’s taste, sprinkle some salt and have it raw.

Rhubarb tastes similar to sour green apples. Some feel rhubarb has a refreshing taste and similar to celery, but the former is much tangier. Due to its bitter rhubarb taste, it is usually an addition to flavor juices. Rhubarb, when used in vegetable juicing recipes, balances the bitter taste of certain green vegetables.

Rhubarb can be consumed raw, but most of the time, the stalks are chopped and boiled with sugar. It has a low sugar content, and upon adding sugar, it is a primary ingredient for desserts and pies. So, what does rhubarb pie taste like? It actually tastes quite good! The rhubarb plant is known as “the pie plant.”

You may have had rhubarb in pies or other baked confectioneries. Here are few more ways to enjoy eating rhubarb.

Drying the rhubarb is a time-consuming process. To dry this vegetable, you need to boil it in water. Add a cinnamon stick and some sugar to it while boiling. The consistency should be similar to applesauce. Pour the mixture on dehydrator trays lined with parchment paper. Dry the rhubarb mixture at 135°F for nine hours.

Pureed rhubarb can be an ingredient added to margaritas. It gives a tart taste when added to berry or banana smoothies. You can also make rhubarb jam by slicing it and cooking it in few tablespoons of water. Just blend rhubarb, let it cool, and then simply add champagne or prosecco. Try adding rhubarb syrup to freshly-steeped iced tea, or eat it with strawberries as a dip.

Here is the easiest method to roast rhubarb. Wash the rhubarb stalks and pat them dry. Chop them into half-inch pieces. Preheat the oven to 375°F and grease a pan with cooking spray. Spread the rhubarb in a single layer on the pan, and sprinkle one to two tablespoons of sugar. Roast the rhubarb for 20 to 25 minutes.

Before trying the above methods, attempt to eat the stalks raw. Dip the stalk in sugar and enjoy. You can try dipping it in other sweeteners like honey, maple syrup, or agave nectar. Eating fresh stalks dipped in sweeteners is a good option to mitigate the tart rhubarb taste. You can also sprinkle diced rhubarb over yogurt or cereal.

Those who are health-conscious can replace sugar with fresh berries, such as strawberries, raspberries, or blackberries. You can boil rhubarb and add some dried fruits to infuse sweet flavor without adding sugar. Or, you can also replace water with 100% fruit juice to cook the rhubarb. The sugar from the juices will get infused into the rhubarb, and give it a sweet taste. You can opt for orange, apple, or cranberry juice.

How to Make Rhubarb Taste Good

Now that you what does rhubarb taste like, here are two delicious rhubarb recipes for you to try and make it taste much better.

Preheat the oven to 375°F. Put all the ingredients in a large bowl and mix them together. Grease the pan and pour the batter into it. Bake for 40 minutes.

Cover the pan with a foil and bake for 20 minutes more. Insert a toothpick into the cake. If the cake has completely baked, the toothpick will come out clean.

Let the cake cool, cut it into slices, and enjoy!

Combine the flour and sugar in a bowl. Add the butter and mix until the mixture resembles crumbs. Press the mixture into a greased baking pan, and bake at 350°F for 10 minutes.

To make the filling, combine sugar and flour in a bowl. Pour in the cream and eggs.  Then, add the rhubarb. Pour the mixture over the crust.  Bake at 350°F for 40 to 45 minutes, or until the custard sets. Cool the custard.

To prepare the topping, beat together sugar, cream cheese, and vanilla until smooth. Pour in the whipped cream. Spread the topping over the custard.

Cover and chill. Cut into bars and refrigerate.

Knowing what does rhubarb taste like and how to make it taste better, let’s discuss the nutritional content of rhubarb.

One cup of diced, raw rhubarb has only 26 calories. Rhubarb is rich in vitamins C and K. It also has a decent amount of fiber and some sugar. 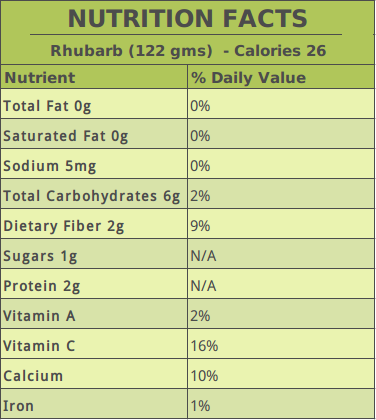 Rhubarb is very low in fat and has trace amounts of protein and vitamin B group compounds. It has a decent amount of minerals such as calcium, potassium, and manganese, magnesium, iron, and phosphorus, as well as selenium in trace amounts.

People who love sour foods will definitely like the taste of rhubarb. You can enjoy rhubarb in any way. Have it raw or add it to recipes to reap maximum health benefits of this vegetable. Eating rhubarb helps reduce cholesterol, lowers blood pressure, and reduces acid reflux.