Home > Food Facts > Spices > What Spices are a Substitute for Cloves? 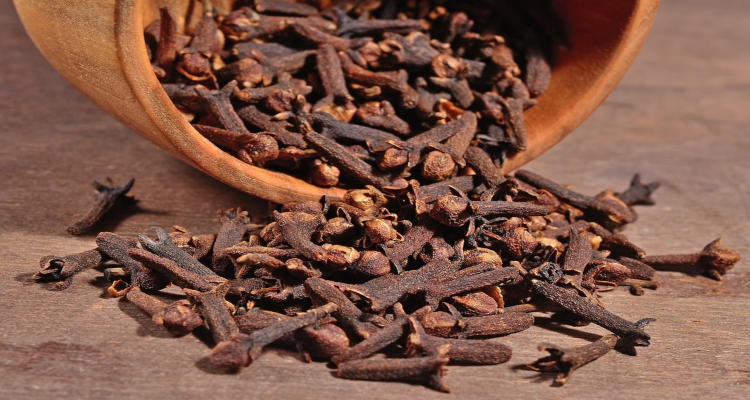 For many years, people have used ground and whole cloves for traditional Indian medicine and cooking. For cooking, this popular spice is often found in stews, soups, sauces, meat marinades, and rice dishes. From a health perspective, it is often used for oral health, obesity, diabetes, and cancer.

You may ask, “What spice can I substitute for cloves?” Or vice versa. Although nothing quite compares to cloves, if you are all out of the spice or have a mild allergy and want to achieve comparable flavors and similar health benefits, you can use a substitute for cloves.

Cloves are an aromatic flower bud from the clove tree (Syzygium aromaticum) in the myrtle, or Myrtaceae, family. They originated in Indonesia, and are also harvested in Sri Lanka, Pakistan, India, Madagascar, Bangladesh, and Tanzania.

Regardless of why you need a cloves substitute, it is important to understand your options. You can find a potential substitute for cloves in allspice, nutmeg, cardamom, mace, or cinnamon. Throughout this article, we will detail the best substitutes for cloves, as well as how you can use them in various dishes.

Clove is one of the most powerful flavors in your spice rack. The aroma and taste of cloves are incredibly intense, and even the smallest amount can be overpowering for some people.
The taste of cloves can be described as pungent, sweet, and strong, with an astringent, bitter flavor as well. There is also a distinctive warmth associated with cloves, and some also find that the flavor is hot.

What is a substitute for cloves? You will want your cloves substitute to have comparable flavors and similar health benefits. Therefore, good options will include allspice, nutmeg, mace, cinnamon, cardamom, white and black peppercorn, and anise.

In this section, we will detail everything you need to know about cloves substitutes, including how they taste and benefit your health.

You can substitute allspice for cloves, and this is partly because both spices belong to the Myrtaceae family. Allspice is the dried unripe fruit from the Pimenta dioica tree, and is native to Central America, southern Mexico, and the Greater Antilles—a group of larger islands in the Caribbean Sea.

It was named allspice by those who thought it had the combined smell and flavor of cloves, nutmeg, and cinnamon. That being said, it is not a combination of these spices. The berries of allspice are dried in the sun, and then ground to release their characteristic smell.

Allspice also has a number of its own health benefits, including being used for excessive flatulence, nausea, vomiting, diarrhea, cramping, and bloating. In recipes, you can use the same amount of allspice as cloves.

Nutmeg is the best option for a clove substitute. It is made by grinding the seed of the nutmeg tree (Myristica fragrans) into nutmeg powder. Again, nutmeg has a flavor and smell similar to both cinnamon and cloves. As a result, nutmeg is a good substitute for ground cloves.

You can use the same amount of nutmeg when recipes call for cloves. While many people like to use half as much nutmeg, the flavor shouldn’t overpower your food since nutmeg is less potent and intense than cloves.

If both allspice and nutmeg are unavailable, cinnamon can also work as a substitute for ground cloves. Cinnamon has less sweetness and more spice than cloves, and although it is not a perfect substitute, it will work as a replacement in most dishes. Some people combine cinnamon with vanilla to achieve a good flavor comparable to clove.

From a health perspective, reports suggest cinnamon is able to protect heart health, fight diabetes, defend against cognitive decline, fight against viruses and infections, and lower your risk of cancer.

It is also able to freshen bad breath, prevent and treat candida, and benefit skin health.

Mace is the spice made from the red coating of the nutmeg seed. Once mace is dried and ground, it creates a delicious spice that is particularly useful in curries, stews, and meat dishes.

However, mace should be added to your meal near the end of the cooking process. That’s because it can become bitter when overcooked.

Because mace is derived from nutmeg, it has a similar sweet and savory taste. Mace may also give a saffron-like color to any recipe. This makes it another excellent substitute for cloves.

How can your health benefit from mace? It is a popular spice for digestive symptoms, including constipation, diarrhea, gas, and stomach pain.

Cardamom is another last-resort spice that can stand in for cloves. The citrus-like and spicy flavor of cardamom is not as sweet as cloves; however, when cardamom is combined with cinnamon, you can achieve a similar flavor profile as cloves.

From a recipe perspective, you will want to use less cardamom when a recipe calls for cloves since cardamom is spicier than cloves. Cardamom is loaded with health benefits. It can boost immunity and therefore help those with respiratory problems and digestive issues like heartburn and irritable bowel syndrome (IBS).

How does peppercorn benefit your health? It is able to improve digestion, and help those with diabetes, cancer, and high blood pressure.

Star anise (Illicium verum) contains eugenol, and this is why star anise can be a substitute for cloves. Eugenol is a powerful chemical found in many other spices, including cinnamon and cloves. Star anise is similar to standard anise seed; however, the star variety is slightly more bitter and has a licorice flavor.

Both contain the essential oil anethole; however, star anise belongs to the Schisandraceae family, while anise seed is from the Apiaceae family. From a health perspective, star anise is full of antioxidant, antifungal, and antibacterial properties. It may also boost immunity, improve digestion, and treat sleep problems. 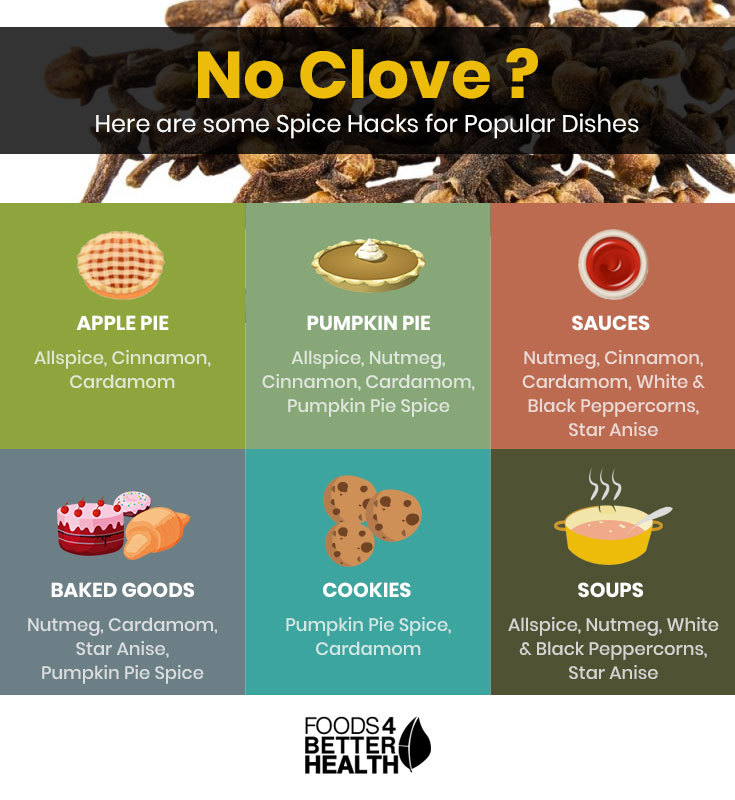 How can you find the right substitute for cloves in recipe options? The best clove substitutes include allspice, nutmeg, cinnamon, mace, cardamom, peppercorns, and star anise. You can also use pumpkin pie spice as an alternative to cloves.

The following is a chart to help you understand how to better use your clove substitute:

Cloves are popular for cooking; however, people often seek substitutes. Maybe you are all out of cloves or have an allergy to them. When you want to achieve comparable flavors with relative similar health benefits, you can use a substitute for cloves.

What is a substitute for cloves? Some of the better clove substitutes include allspice, nutmeg, mace, cinnamon, cardamom, white and black peppercorns, star anise, and pumpkin pie spice. These can stand in for cloves in dishes such as soups, stews, sauces, rice dishes, curries, meat marinades, stews, eggs, potatoes, and even some baked goods like pumpkin pie or apple pie.