Home > Health Conditions > Memory > What to Feed Your Brain 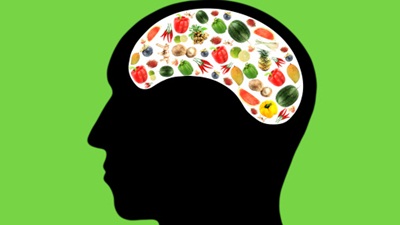 Recently, there has been a great deal of attention paid to the effects the diet has upon the development of dementia. The same can be said regarding the relationship between the human diet and mental illness.

Previous research has clearly shown a pronounced effect that nutrition has upon brain function and how some foods may be good or bad for your brain. The evidence is now becoming obvious that what you eat can influence how your brain functions and how well it functions.

Foods like soda, desserts, sweeteners, candy, white flour products, and frozen dinners have previously been shown to be associated with declining brain function including memory and problem-solving skills.

Foods that are high on the glycemic scale increase blood sugar and insulin levels precipitously and this fuels the fire for inflammation which can damage brain cells.

The added glycation that results from the binding of sugar molecules to protein causes free radical formation inside the brain, causing damage to cell membranes and neurotransmitters.

The consumption of these types of carbohydrates in large amounts has been previously associated with the development of dementia.

Consuming these types of high-fiber carbohydrates keeps blood sugar and insulin levels lower while keeping the arteries inside the brain clearer.

Saturated fat found in red meat, cheese, lard, and full-fat dairy products is associated with high levels of inflammation, poor cerebral blood flow, and a greater risk for brain plaque formation. The greater consumption of saturated fat has previously been associated with an increased risk of Alzheimer’s disease.

Trans fats also increase inflammation and damage the inner linings of brain arteries. The increased intake of trans fat can also clog the smaller arteries which carry blood to the brain cells.

This process accelerates brain aging and negatively influences brain cell function. The intake of trans fat found in fast food has also been strongly linked to a greater risk of depression.

Moderate consumption of alcohol, especially red wine, has been previously shown to lower cholesterol and inflammation, decrease blood clotting, and reduce free radical damage. The careful consumption of alcohol is associated with a decreased risk of Alzheimer’s disease and multiple sclerosis.

However, consuming a high amount of alcohol increases the risk of brain cell damage, impaired memory, and brain cell degeneration. The limit for alcohol consumption seems to be approximately one to two drinks per day.

Healthy fat also provides the brain with a continual supply of building blocks for cellular repair and optimum nerve conduction. High blood concentrations of healthy fats have been associated with lower rates of dementia and depression.