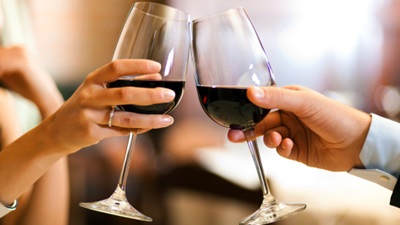 Recent research published in the journal BMC Medicine studied 5,500 Spanish adults aged 55-80 for an average of seven years. At the beginning of this study, none of the subjects reported suffering from depression or alcoholism. The amount of wine that each participant consumed was calculated by an annual food frequency questionnaire and any reported cases of depression or drug use for depression were documented.

The study found that participants who consumed two to seven small glasses of wine per week had a 30% reduced risk of developing depression compared to subjects who did not drink. Conversely, those participants who drank the most wine had the highest rates of depression. These results were maintained even when lifestyle factors, smoking, age, marital status, and the levels of physical activity were accounted for.

“It is believed that depression and coronary heart disease share some common disease mechanisms,” said lead author of the study Dr. Miguel A. Martínez-González.

The chemicals contained within the skins and seeds of red wine are thought to protect the arteries from the dangerous effects of inflammation. Increased amounts of inflammation inside the hippocampus of the brain have been associated with the development of depression. This chemical family is known as proanthrocyanins, with resveratrol being one of the most important. The research regarding the use of resveratrol is quite voluminous, but this unique chemical certainly can decrease inflammation, improve insulin sensitivity, and improve endothelial function inside our arteries.

The production of inflammation inside the brain causes free radical production, cellular destruction, and blunted neuronal function. The use of antioxidant nutrients naturally contained in high concentrations within red wine can decrease this inflammation and remove dangerous free radicals which can influence the way our brain can function.

However, the excessive consumption of alcohol can have a dampening, depressive effect upon brain function leading to a higher risk of developing symptoms of depression.

The important message from this study is that a moderate intake of wine (one glass per day) can have a protective effect upon the development of cardiovascular disease, stroke, depression, and diabetes because of the specialized polyphenolic compounds found within the grapes themselves.

So enjoy that drink, in moderation.